Fifth place a confidence boost for Metcalfe after Dodger Stadium

South Australian Brett Metcalfe is motivated to continue his surge toward the front of AMA Supercross when the series resumes this weekend in Oakland. 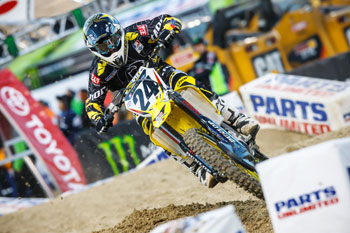 South Australian Brett Metcalfe is motivated to continue his surge toward the front of AMA Supercross when the series resumes this weekend in Oakland.

Coming off a season-best fifth in Los Angeles last week, it was a confidence boost for Yoshimura Suzuki’s Metcalfe to finally gain form after a frustrating start to the season.

“The whole day was the best we’ve had so far,” Metcalfe said. “The Yoshimura Suzuki RM-Z450 was working awesome and I think I had one of the best bikes on the track all day.

“The heat race went well and I ended up fifth, but I rode really well and I think it’s the best ride I’ve had all year. I got a better start on the re-start and I was up there early.

“After being sick, I knew I was going to be short of breath, so I just wanted to hit 20 laps consistently and ride hard, but not to the point where I’d push myself to the limit and start going downhill.

“So I just maintained myself the whole race and came home fifth, which was by-far the best result of the year.”

Next weekend, the Yoshimura Suzuki team heads to Northern California for the next round in Oakland. Last year, Metcalfe carded a fifth place result and he is looking to improve upon that.

“I had a good run at Oakland last year,” Metcalfe added. “We’ve made some good progress over the last week and I want to thank the whole Yoshimura Suzuki team.

“We’ve got a good package with the RM-Z450 and we’re starting to make steps in the right direction. I’m looking forward to getting up front at Oakland.”

Metcalfe has now moved up into seventh place in the title chase thanks to his top five at Dodger Stadium.