Australian rundown from the third round of Monster Energy AMA Supercross in LA. 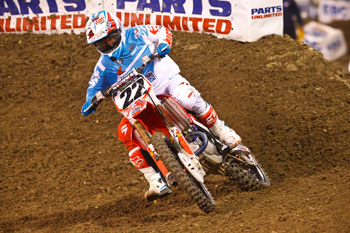 Chad Reed scored his first win of the year for Australia at Dodger Stadium on Saturday night. Image: Simon Cudby.

The TwoTwo Motorsports team owner/rider was eighth in his heat after a crash, but bounced back with an incredible main event performance after an action-packed 20 laps.

Reed won ahead of Ryan Dungey (Red Bull KTM), who is the new points leader, and James Stewart (Toyota/Yamaha/JGRMX), while Ryan Villopoto (Monster Energy Kawasaki) was fourth after crashing on the opening lap.

Brett Metcalfe also enjoyed his best performance of the year with a solid fifth, in the hunt for the podium and building momentum for the Yoshimura Suzuki team.

Honda privateer came up short again in his attempt to make the main event, finishing 13th in his heat and ninth in the LCQ.

Stay tuned for a full report to come once it’s complete.

In the Lites, Matt Moss was the lone Australian contender and finished a career-best eighth in the main event. Earlier in the evening, Moss transferred straight to the main via a seventh in the LCQ.

Moss’ teammate Ryan Marmont was forced out of the event after bumping his head in a training crash during the week, while Jackson Richardson is still out with a shoulder injury.