A return to the podium is the goal for TwoTwo Motorsports’ Chad Reed as the gates drop on round three of Monster Energy AMA Supercross at Los Angeles’ Dodger Stadium. 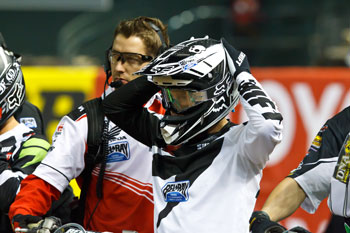 Chad Reed is setting up for a podium run this weekend at Dodger Stadium in LA. Image: Simon Cudby.

A return to the podium is the goal for TwoTwo Motorsports’ Chad Reed as the gates drop on round three of Monster Energy AMA Supercross at Los Angeles’ Dodger Stadium this Saturday.

Reed endured a difficult run in Phoenix, with a crash in his heat compounded by a slow start in the main event.

A fifth place finish saw him slip a position to third in the championship hunt, but he said progress had been made despite the obvious setbacks.

“To come away with fifth wasn’t bad, I felt like we’d make a lot of headway in Phoenix but it just turned out one of those nights where nothing went our way,” said Reed.

“We’ve taken the positives from the experience and had the chance to address some issues through the week so we go to LA feeling pretty strong.”

The two-time AMA Supercross Champion once again identified the main event start as the most crucial part of the night.

“Last week’s track was better than the first week but it was one that rewarded the guy that got the holeshot,” he said.

“If you’re back in the pack you’re continually adjusting how you’re riding to think about a pass or trying to second guess what the guy ahead is doing.

“This is where the time is lost and is ultimately the difference between being able to fight back for a podium or finishing top five.

“It’s a very long season and consistency pays off over risky moves – we’re happy to be in third and will be fighting hard for another podium result this Saturday night.”

The Australian rider currently sits third on the standings, just seven points off the joint lead held by Ryan Dungey and Ryan Villopoto.