Wilson to use Phoenix Lites win as platform for championship pursuit 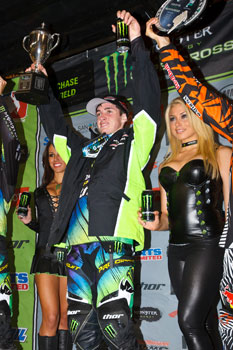 Monster Energy Pro Circuit Kawasaki’s Wilson started off the night strong laying down the fastest qualifying practice time in the Lites class aboard his KX250F.

He went on to win his heat race and headed into the main event confident he had what it took to come out on top. When the gate dropped in the main, Wilson got a good jump off the start and pulled into third.

As the top three riders came out of the first corner and into a rhythm section, Wilson found an opening and quickly moved out front. By the sixth lap, Wilson had a four-second lead and continued to ride smooth and consistent until the finish.

“It felt brilliant taking the win tonight,” said Wilson. “I was able to get into the lead early and had a nice, clear track for most of the race. I just focused on putting down clean laps.

“I felt like I had really good lines out there and was really working on controlling my breathing.”

After a disappointing crash while in the battle for a podium at Anaheim, Wilson said that experience helped him break through at Phoenix.

“This win really means a lot because last weekend at Anaheim I felt like I should have won, but I just made some mistakes that cost me,” he continued.

“I know I have what it takes to win, but now I know what I need to do to make that happen.”