Canard content with seventh place upon return at Chase Field

Team Honda Muscle Milk's Trey Canard has rated his comeback at Phoenix Supercross a relative success after returning from a pre-season injury. 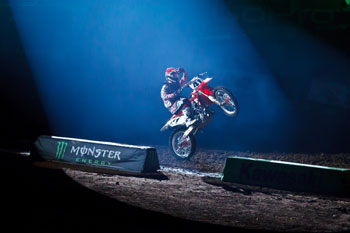 Honda's Trey Canard was back in the spotlight at Phoenix last weekend. Image: Simon Cudby.

Team Honda Muscle Milk’s Trey Canard has rated his comeback at Phoenix Supercross a relative success at Chase Field Stadium after returning from a pre-season injury.

Canard missed the opening round at Anaheim through injury, however a seventh place finish at the series’ second round was a solid performance by Canard.

“I am excited to be here and I’m excited to be riding,” said Canard. “It is a bummer for me because I am not right up with the guys that I normally compete with, but overall it was a very successful weekend.”

On the comeback trail from collarbone surgery, Canard eased his way back with seventh in his heat, as well as the main.

Last season as a rookie, Canard raced to a spectacular three race wins before getting injured late in the series while preparing for the outdoors.

Canard’s teammate Justin Brayton finished 14th at Phoenix after getting caught up in an early crash during the race.