Metcalfe: We have got to keep progressing and stay positive 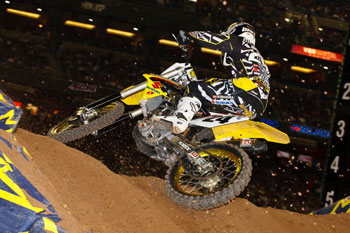 The South Australian broke through for his first top 10 finish of the year at Phoenix last weekend with a ninth position, which was an improvement by two places over Anaheim 1.

Consistency was the key to the Aussie rider’s night and although a bit under the weather, he put up a good fight all night long.

“We had a really good week leading up to Phoenix and I came in a little more confident,” Metcalfe explained. “In the main I tried as hard as I could. About half way, I started getting passed but I tried to hang tough and hold down a top 10.

“I was a little under the weather this weekend and it was a tough 20 laps for me, but I managed to get through. This was a much more positive direction for us and I’m looking forward to having another solid week on the bike and moving up in the field.”

This weekend the Yoshimura Suzuki team will revisit Los Angeles’ Dodger Stadium for only the second time ever. Metcalfe’s experience at the renowned venue was a memorable one last season.

“Dodger stadium was awesome last year,” said Metcalfe. “The crowd was really cool and just being in that stadium was pretty spectacular. I got the holeshot and led two laps, but then I fell.

“But that’s still a good memory to feed off and I’ll try to duplicate that again, but stay up and not crash this time. Now, we’ve got to keep grinding it out, progressing and stay positive.”