JDR Motorex KTM has teamed up with Mydrade Hydration for the 2012 Australian motocross and supercross season. 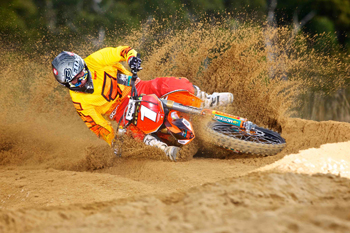 JDR Motorsports has teamed up with Mydrade Hydration in Australia for 2012.

JDR Motorex KTM has teamed up with Mydrade Hydration for the 2012 Australian motocross and supercross season, announcing a competition to celebrate their partnership.

You could win an official signed Tye Simmonds/JDR Motorex KTM team jersey, as well as a Mydrade Rider Pack that features 15 packs of Mydrade, a Camelpack and two water bottles.

To be in the draw, all that you have to do is ‘Like’ and share both JDR Motorsports (www.facebook.com/jdrmotorsports) and Mydrade (www.facebook.com/mydradehydration) on Facebook. The contest winner will be drawn on Thursday, 19 January.

Mydrade is a low calorie premium hypotonic drink which has been scientifically developed and tested by leading athletes around the world for over four years.

Mydrade contains all the essential vitamins, minerals and electrolytes essential in the re-hydration process and contains less than 29 calories per serve.

By using natural honey as the sweetener, Mydrade has around 7-10 times less sugar than the leading sports drinks on the market and is the sports drink of choice for JDR Motorsports.