Victorian Cheyne Boyd has confirmed that he'll return to the Pro Lites for 2012, involved in a brand new privateer effort with support from Honda Australia. 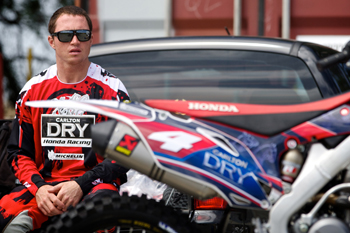 Cheyne Boyd will switch to a privateer Honda team in the Pro Lites for this season.

Victorian Cheyne Boyd has confirmed that he’ll return to the Pro Lites for 2012, involved in a brand new privateer effort with support from Honda Australia.

Boyd told MotoOnline.com.au that he has struck a deal with Dale Hocking to contest the Australian motocross and supercross championships in the Pro Lites category.

After a frustrating two seasons in 2010 and 2011, 29-year-old Boyd was left scrambling for a factory 450 seat, however that deal never came about as planned.

“After supercross there was no real talk of any team rides,” Boyd said. “No offers came around, but I did have a couple of Lites teams call me. It just got me thinking a little, because going back to the Lites isn’t something I set out to do.

“It seemed like it was my only option to go racing. The money that everyone was talking was nowhere near where it needed to be, for me. There were a lot of weeks where I was frustrated and really thought that nothing was going to come about.

“It just so happened that Dale Hocking has two sons that race. He gave me a call up and said he has a truck, can pay me this much and try get sponsors as well.

“I also chased up a few sponsors myself, obviously being in the sport for so long because I have a fair few contacts. I’m lucky enough that Honda have put together a really good deal for not just me, but they are supporting the younger guys on the team as well.

“I don’t think it’s a step backwards in my career at all, it’s just that the rides on the 450 teams have basically been taken up by overseas guys.”

Boyd and the team are set to unveil the official team name and partnering sponsors in the coming weeks.

Stay tuned for a full profile on Boyd’s switch later this week on MotoOnline.com.au.