Phoenix AMA Supercross round winner Ryan Dungey has revealed that he was inspired by Red Bull KTM teammate Marvin Musquin's debut podium in the Lites on Saturday night. 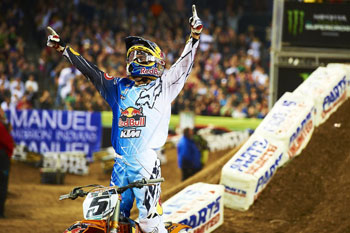 Phoenix AMA Supercross round winner Ryan Dungey has revealed that he was inspired by Red Bull KTM teammate Marvin Musquin’s debut podium in the Lites on Saturday night.

Dungey sealed KTM’s first Supercross Class victory since the company committed to pursue a top place in the U.S. competition, adding to its honours in the world championships.

After qualifying third fastest, Dungey earned a fourth place finish in his heat to transfer to the main. From there, his main event performance was flawless as he led all 20 laps.

Just moments after watching former MX2 World Champion Musquin podium with a second in the Lites, Dungey was determined to make it a double podium for KTM.

“I was definitely motivated by my teammate tonight,” Dungey said on the podium. “I saw Marvin got second in the Lites main and knew I had to step up my game to match him and do well for our team.

“This win feels so incredible. The whole crew at KTM has been behind me 100 percent since I joined them in October and it is amazing to earn this win together!”

After taking third at Anaheim 1, Dungey now tops the points table and will wear the red plate at Los Angeles Dodger Stadium this weekend.