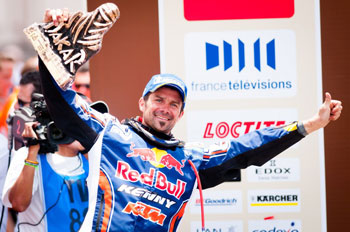 Red Bull KTM factory rider Cyril Despres has taken out the 2012 edition of the Dakar Rally, handing KTM its 11th consecutive win in the toughest event on the annual motorsports calendar.

In the 2012 edition, eight of the top 10 finishers and 15 of the top 20 rode KTM machines underlining the dominance of the Austrian brand’s sports bikes.

“Today we won and it’s simply fantastic,” Despres said. “This is without a shadow of a doubt the toughest Dakar I’ve ever raced in. It was difficult physically, but even more psychologically.

“Challenging yourself every morning and fighting on the course takes its toll on your mind. It’s not like a 42-kilometer marathon. Here, you have to earn your place every morning.

“All victories are beautiful, but this one is special because it came down to the wire and was decided at the last minute. This was an unimaginable scenario, with the leaders separated by mere seconds.

“I’ve done 90 or 85 rallies throughout my life, and this one was the one where I had to fight the hardest. Today will leave its mark on me.”

His KTM factory teammate Marc Coma, who won the rally in 2006, 2009 and 2011 finished second after one of the Dakar’s most historic and closely fought battles.

Both riders set the scene for a two-way competition right from the first stage and remained minutes apart until the penultimate stage on Saturday.

Coma won five stages in the 2012 edition and Despres four but it was the turn of the Frenchman to ride in triumph into Lima.

Of the Aussies, top finisher was Dean Nuttal in 40th position aboard a KTM, while Davide Schwarz was 43rd for Husaberg and Jamie Chittick 54th on a Honda.