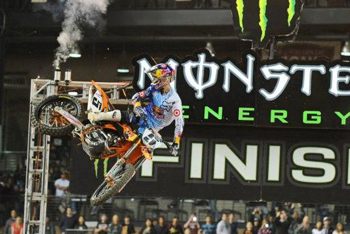 Ryan Dungey won for Red Bull KTM second time out at Phoenix on Saturday night in the U.S.

Ryan Dungey has awarded Red Bull KTM its first ever victory at Phoenix’s second round of the 2012 Monster Energy AMA Supercross, an FIM World Championship, season.

Dungey was flawless in the 20-lap main event at Phoenix, leading from wire-to-wire in a dominating performance aboard the ‘Factory Edition’ 450 SX-F.

The 2010 champion capitalised on a good start out of the gate in the Supercross Class main event to grab the holeshot and checked out on the field.

Behind him, Toyota/Yamaha/JGRMX’s Davi Millsaps and Monster Energy Kawasaki’s Ryan Villopoto assumed their spots at the front of the field.

The wild action of the night began when Millsaps went down in the track’s sand section on the opening lap, collecting Villopoto and relegating both riders to the tail end of the field.

Villopoto’s misfortune allowed both Reed and Stewart to move forward, crossing the line 8th and 13th, respectively. From there, Reed, Stewart, and Villopoto began climbing their way through the field, with Reed and Stewart doing so together.

Just as Stewart made his way past Reed in his continued forward progression, he went down in the same section as Villopoto on lap seven, falling outside the top 10.

Villopoto eventually made his way around Reed and set his sights on the top five, slowly picking his way through the field and bringing the crowd to its feet.

In the end, Dungey took the checkers by over six seconds for his second Supercross Class win in Phoenix.

“This was a big step in right direction for KTM,” said Dungey. “They’ve been behind me the whole way and believed in me. We’ve come a long way since the off-season, but there’s still a lot of racing to go.

“I got off to a great start and [moved] into the lead early, which made it nice on myself. If it wasn’t for all these people [at KTM] working their butts off every week, this wouldn’t happen, so I owe this all to them.”

Monster Energy Kawasaki’s Jake Weimer finished second for his first career Supercross Class podium, while Villopoto passed most of the field and fought his way into third to salvage his points lead.

“It was a tough night,” said Villopoto. “Davi went down in front of me in the sand and I went right into him. It happened on first lap, and when that happens, you have your work cut out.

“There’s 20 laps to do it, so you’ve got to make quick work of it. The bike was working great though. I salvaged a lot of points tonight, so it was good.”

Reed brought home a fifth-place finish, while Stewart soldiered on to finish eighth.

Dungey and Villopoto currently have a share of the points lead, and both will adorn their bikes with the red number plate next weekend, signifying the current rider in control of the championship.

Yoshimura Suzuki’s Brett Metcalfe was ninth in an improved performance from Anaheim 1, while Cody Mackie missed out on a position in the main event for the second week in a row.

In the Supercross Lites Class, Monster Energy/Pro Circuit/Kawasaki’s Tyla Rattray captured the holeshot, but Wilson worked his way into the lead on the exit of the second corner.

Once out front, Wilson continued to pull away from his competitors and rebound from a sixth-place effort one week ago.

“This feels great,” exclaimed Wilson. “Last weekend just wasn’t me. I think I was too confident coming in. It just means so much to get this win.

“The track was really slippery and required a lot of throttle control. This class is unbelievable and it’s not going to be easy, but I want to be in the championship and I’m going to try my best.”

Both Matt Moss and Ryan Marmont failed to make the main event for JDR/J-Star/KTM in Phoenix, while Jackson Richardson was forced out with a shoulder injury according to reports.

The 2012 Monster Energy Supercross season continues next Saturday, 21 January, from Los Angeles, with the third race of the season inside Dodger Stadium.