Wil Hahn out with fractured hip while training in California

GEICO Honda's Wil Hahn has been injured while training in California at Honda's official test track. 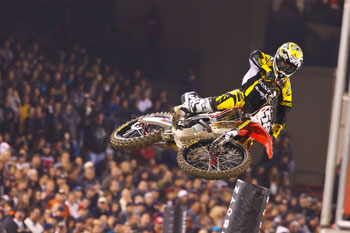 Wil Hahn has been ruled out of upcoming AMA rounds with a fractured hip. Image: Simon Cudby.

GEICO Honda’s Wil Hahn has been injured while training in California at Honda’s official test track, suffering a fractured right hip on Wednesday.

“I’m just shocked, numbed,” Hahn said. “I was training this week at the Honda track and things were going great. I went over a step up, landed awkwardly, fell over and landed hard on my right side.

“I felt sore when I got up. I went to the doctor and X-rays showed something was wrong. I went to a specialist on Thursday and he said my hip was cracked.

“I’m going to follow the doctor’s orders so I can come back and finish the season strong.”

Team manager Mike LaRocco said that it’s too late in the week to find a substitute for Hahn at this weekend’s race at Chase Field in Phoenix.

“We didn’t know how bad Wil’s injury was until after he saw the orthopedic guy Thursday,” LaRocco said. “By that time, the truck had already left for Arizona and it was too late to find someone to fill in Wil’s spot.

“So we’ll just have Kevin Windham and Eli Tomac racing for us this week. We just feel sick about this for Wil. He had been so strong on the bike in practice and at A1, and to see him have a setback like that makes your stomach turn.”

Hahn had a triumphant return to Supercross racing last week at the season opener in Anaheim, winning his heat race by several seconds before finishing eighth in the main.

Hahn lost the entire 2011 SX season with a broken back suffered during practice at the season opener.