Townley positive that Carlton Dry Honda development is on track

Carlton Dry Honda Thor Racing's Ben Townley has revealed that he feels the best that he has in his entire career on the 2012 model CRF450R that he'll race in Australia this year. 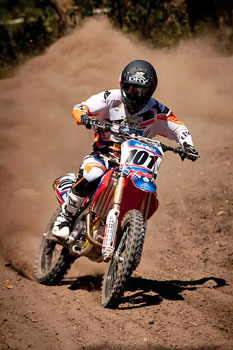 Carlton Dry Honda Thor Racing’s Ben Townley has revealed that he feels the best that he has in his career on the 2012 model CRF450R that he’ll race in Australia this year.

The 2004 MX2 World Champion and 2007 AMA East Coast Lites Supercross Champion is at home in New Zealand preparing for the upcoming MX Nationals series, quickly settling into his new role with Honda.

With international experience on his side, the 27-year-old says that he feels as comfortable on his new ride as he did in 2007 when he battled back and forth with Ryan Villopoto for the AMA Pro Motocross Championship in the 250 Class.

That season, Townley finished runner-up to Villopoto in the outdoors with six round wins to his credit aboard the Monster Energy Pro Circuit Kawasaki KX250F – the team widely regarded as the best Lites program in the world.

“I would go so far to say that at the moment, I’m as comfortable on my bike as what I ever have been,” Townley said. “I would have thought that I’d never be as comfy as I was in 2007, but the way I’m feeling on the bike now is a pretty good feeling.

“The bike that I’ve got set up at the moment, I could not be happier on and we’ve only done one test. There’s obviously more to go through, but if I was to sit there and say lets line up tomorrow at the first round of the Australian championship, I’d be more than happy to go racing.

“I’m absolutely stoked with where we’ve got to on the bike.”

Carlton Dry Honda Thor Racing has made a number of major component and supplier changes within the team for 2012, including a switch from Michelin to Pirelli tyres for the new year.