Reed: Villopoto showed us all we need to step it up at A1

Australian Chad Reed believes that the entire field needs to rise after witnessing the performance of Ryan Villopoto at last weekend's opening round of AMA Supercross. 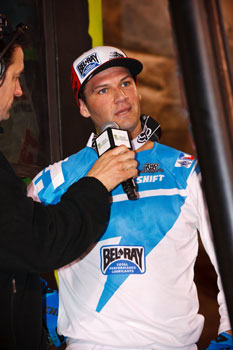 A podium in second at A1 for Reed was solid, but he wants more in Phoenix. Image: Simon Cudby.

Australian Chad Reed believes that the entire field needs to rise after witnessing the performance of Ryan Villopoto at last weekend’s opening round of the 2012 Monster Energy AMA Supercross, an FIM World Championship, series.

A week of hard work at the team’s test track has Reed and TwoTwo Motorsports prepared to challenge for the top spot of the podium during this weekend’s second round at Phoenix’s Chase Field.

Reed, 29, opened his 2012 account with a hard-earned second place at Anaheim 1, earning a vital 22 points. He was also a convincing winner in his heat race.

Despite the solid result, Reed’s focus remains on top spot, and he admitted there was lots of work to be done to close down the advantage enjoyed by series leader and 2011 champion Villopoto.

“Ryan rode a great race and showed us all we need to step it up,” said Reed. “Second was a good result but we left A1 with some areas to work on and have been concentrating on these during the week.

“I was happy with my start in the main, its always difficult to get out of the gates at the front after you’ve spent so much time testing and riding by yourself.

“The season will be about speed and consistency – we had the consistency last year to be in it until the last race, and now we need to step it up and get more race wins on the board.

“I’m proud of the guys for their effort, we’re still a young team and we’re working together so well.”

Reed’s A1 podium was his 115th from just 142 starts in AMA Supercross, a statistic that marks him as one of the sport’s most successful.

Stay tuned for all the results and race updates this weekend from Phoenix on MotoOnline.com.au.