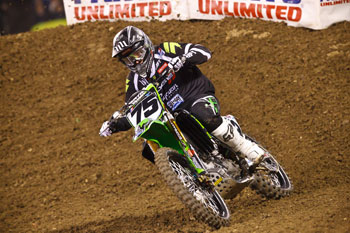 The luckless Hill was returning for the Carey Hart-owned team after a lengthy period on the sidelines, but crashed in his heat race, causing a broken leg that’s unrelated to his previous injuries.

Despite the injury, Hill lined up for the LCQ, but immediately had to return to the pits once the gate dropped, putting an end to his comeback.

“It was good to be back racing and it was great to be there to practice and to have that feeling of racing again,” Hill said of his return. “Unfortunately our night went sour 100 yards off the start in a first turn crash.”

It’s expected that Hill will be out for a further four to six weeks, but Racer X reports that the H&H team won’t be replacing him aboard their fourth KX450F.