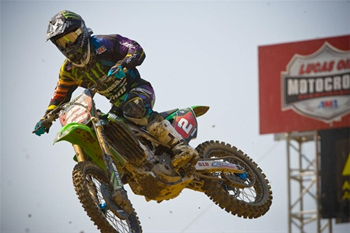 AMA Pro Motocross will wrap up at Lake Elsinore in California this September.

On the heels of announcing the 2012 series schedule, it’s been confirmed that the renovated Lake Elsinore complex will be the host site of the season finale, set to take place on Saturday, 8 September.

Located in the hotbed of the motocross industry, and about an hour outside of the major metropolitan areas of Los Angeles and San Diego, Lake Elsinore serves as an ideal location for fans of the sport across the entire southern portion of the state.

It’s also well-known to students of the sport’s history as the site of the Lake Elsinore Grand Prix, which was featured prominently in the epic motorcycle racing documentary film On Any Sunday back in 1971 – one year before the Lucas Oil Pro Motocross Championship was born.

“A successful search has landed the Pro Motocross finale at what we feel is the ideal location for a national event in Southern California,” said MX Sports president Davey Coombs.

“This is a brand new facility that was built from the ground up to host such an event, and offers riders one of the best layouts of any track in the country.

“We like to close out the summer where the sport of motocross thrives, and we believe we’ve found the perfect place in Lake Elsinore Motorsports Park.”

The Marc Peters-designed venue is state-of-the-art in terms of motocross and features multiple elevation changes, spectacular obstacles, and easy access for the fans.

The facility was designed with not only riders but spectators in mind as well, with paved roads and walkways, lush landscaping, camping amenities and designated areas at multiple elevations for viewing.

“Sight lines might be one of the most underrated values of what makes or breaks any motocross track for the fans,” said Peters, himself a former pro racer and the son of recent Motorcycle Hall of Fame inductee Stu Peters.

“We built this so there isn’t a bad spot to watch from, no matter where you choose to stand. It was our dream to host a national.”