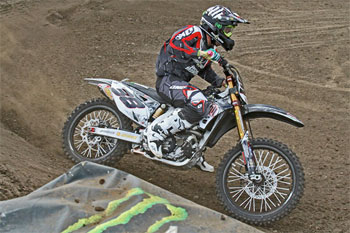 Hart and Huntington/InsureMyRide team boss Kale Wallis has confirmed that the team is looking to expand into the Australian Motocross Championship for 2012.

After a successful debut in Super X with American Chris Blose leading the team’s Pro Open line-up, Wallis told MotoOnline.com.au that the plan is to race both the outdoors and supercross next season.

Longtime Hart and Huntington athletes Daniel McCoy and Lewis Woods are currently on the short list for the team, however final details are currently in negotiations.

“It looks like McCoy will most likely be riding Pro Open for us and Lewis Woods will be riding Pro Lites,” Wallis explained to MotoOnline.

“Ideally I want to run two riders in Pro Open and one in Pro Lites, but at this point we are struggling to find another Pro Open rider because they’re basically all hooked up.”

Wallis said the team’s expansion into the 10-round motocross series is an important step, and the team will likely retain the support of insurance giant InsureMyRide.

After debuting the team this year without any manufacturer support and using Kawasakis to coincide with H&H’s U.S. program, Wallis said the team is in discussions with multiple brands at the moment.

“I’m hoping to do it, because InsureMyRide are keen to back us again in all aspects of racing, both motocross and supercross,” he added. “We are just basically sorting out bikes that we are going to ride, because we don’t have any.

“We are speaking to three different manufacturers, but we’re still working on it. Time will tell.”

Blose finished seventh in the Super X standings after two podiums to round out the season, but it was the off-track presentation and entertainment provided by the rookie team that gained ultimate attention during the five-round series.