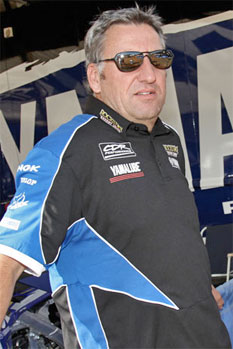 Speaking exclusively to MotoOnline.com.au this afternoon, Dack again confirmed that experienced Kiwi Josh Coppins will return to the team for the outdoors, which will almost certainly be his final professional season.

“Like I’ve said the whole way along, Josh Coppins has already been done because he’s pretty much got one year left in his career,” former multi-time national champion Dack explained to MotoOnline. “He’s going to finish out with CDR just doing motocross this year.”

Speaking of a potential rider to take Marmont’s seat alongside Coppins, Dack said the team has carefully been monitoring its options, but revealed Bopping as a leading candidate.

“We know that Jay has massive shoes to fill and we don’t expect that we are going to fill that gap in the first year,” continued Dack. “But in saying that, we are being very vigilant in what is our next step, what we will do next.

“At the moment I have been talking with Lawson Bopping, but no deal has been reached. I see Lawson as a young guy who’s won motos in motocross and who has been on the overall podium a few times in motocross.

“He won the Maitland supercross this year and has won heat races, so in my mind, he has proven he’s got the speed. The number one thing you look for in a rider is speed and he’s got that. There is no doubt about that because he’s proven it and the results show it.

“I guess the next step for Lawson from his point of view is to make sure he goes with a team that can put the right structure around him to help him achieve those results that he’s had before consistently. I feel that we do have what it takes to offer him that.”

With Bopping’s potential signing not yet a done deal, Dack revealed that he has entered into discussions with other options, including international riders, following Marmont’s departure. Dack said that the team’s sponsors will remain in place.

“We’ve had some chats with other guys that I don’t want to disclose, both in Australia and off-shore,” Dack added. “We are finalising our sponsorship deals that are in place with the team, which everything is staying the same.

“Nobody’s changing, everything will stay the same, from Yamaha, to Rockstar, to all our other sponsors that have been with us forever and a day. Things are going very well with those.

“At this stage, without confirmation or anything, everything is looking very good for CDR next year.”

An announcement once the second rider is finalised could come as soon as this week, however that’s yet to be made official. In 2011, Bopping formed part of the Raceline Pirelli Suzuki satellite program.

Dack also further spoke out on the departure of Marmont, who won five titles (four MX and one SX) in four years with CDR from 2008-2011. Marmont will line-up alongside Billy Mackenzie at Monster Energy Kawasaki next year.

“Officially I guess it is disappointing that Jay’s gone, because he and I had a great relationship and still remain really, really good friends,” Dack added. “The entire CDR staff including myself have great respect for Jay.

“There’s no issue there whatsoever on both sides and, for the record, there’s been no falling out. It’s all about him feeling like he needs a fresh start.

“I feel like for Jay, he hasn’t got a lot of pressure on him because what’s he got to prove? He’s won five premier class championships in four years.

“I guess it’s Kawasaki who has the pressure on them because anything less than five premier class Australian titles in four years will be a failure [laughs].”

Next year’s Australian Motocross Chamionship will commence in Queensland on 1 April before spanning over an expanded 10-round duration.