Arbon certain he can benefit from Anderson’s experience next year 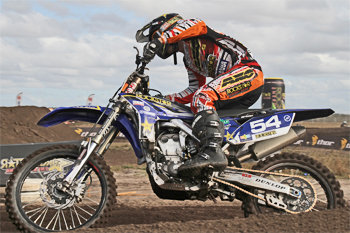 Luke Arbon will be one to watch under the guidance of Craig Anderson in 2012. Image: Alex Gobert.

South Australian Luke Arbon admits that having Craig Anderson on his side will be a massive boost for him when he lines up for Berry Sweet Strawberries/Lucas Oil Yamaha in 2012.

Arbon was yesterday announced as the team’s Pro Lites rider in an all-new structure that now has Yamaha support, and he’s counting on the experience of Anderson to help him make next year a successful one.

“Having a rider like Ando in my corner will point me in the right direction, for sure,” Arbon told MotoOnline. “He’s been there and done everything, won national titles and also has experience overseas.

“It’s always good to have somebody helping you who has been there and done it. Ando’s always been a great rider obviously, so hopefully I can learn a lot from his experience.”

Arbon will step up to the Pro Lites full time in 2012 after a split season of Under 19s MX and Lites SX this year, which is something that he’s excited for. Fifth place in the Super X series is a confidence booster for him.

“I’ve always wanted to race Pro Lites, but it just didn’t happen soon enough for me,” he continued. “I’m looking forward to racing in the Lites and I’ve moved back home from Queensland so my dad’s coaching me again.

“I think I’m a lot more comfortable when I’m at home. I’ll put in the laps, put in the hard work and I’m sure it will pay off next year.”

After joining Yamaha this year as part of the GYTR Rockstar Energy Drink Yamaha development program, Arbon said he’s confident his switch to Anderson’s team is a good one for his future.

“Ando is in it to have fun and get results along the way, as I am too,” he added. “When you’re having fun then the results come by themselves. I did have an opportunity to go to Serco, but it was just a little bit too hard.

“It was a lot easier to go to Ando, I’ll have the support there and I’ll have the bike that I need to win. I’m really happy to go with Ando.”