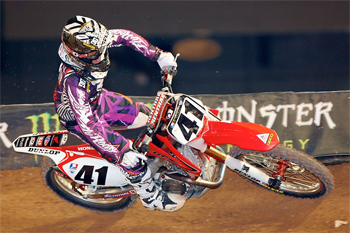 Canard fractured his collarbone in a crash during practice while preparing for the season opener at Anaheim in California as he and the team were making preparations for the upcoming supercross season when the incident occurred.

“Trey suffered a fracture to his collarbone when he crashed at a team test,” said Team Honda Muscle Milk manager Erik Kehoe. “He underwent surgery and his physicians estimate he will need a recovery time of four weeks at the minimum.

“It’s very disappointing to see this happen to Trey, especially after all the hard work he’s put in to recuperate from injuries in 2011.

“He will miss the first few supercross rounds, but our team will continue our preparations for the upcoming season with Trey’s teammate, Justin Brayton.”