Mackenzie looking for a big season in his third with Kawasaki 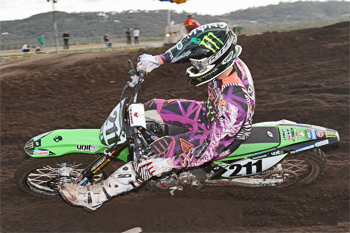 Monster Energy Kawasaki's Billy Mackenzie will be a title contender outdoors in 2012.

Scotsman Billy Mackenzie is certain that all his hard work could pay off in 2012 when he and Monster Energy Kawasaki enter their third consecutive season together.

Mackenzie has re-signed for the Queensland-based operation, admitting that their first two years together have been a learning experience, but his confidence is high ahead of next year.

“I feel like 2012 is going to be a solid year,” Mackenzie added. “The last two years have been a steep learning curve for both the team and I, but through our hard work and results we have now established ourselves as a top team in the pits.

“With the backing from Monster and all our sponsors, the team has grown bigger and stronger every week.”

Another boost for Mackenzie next season will be the addition of Kawasaki’s 2012 model KX450F, which is all-new for the season ahead.

“I have found a set-up with the 2012 KX450F that I am now completely confident with, so with that covered I can concentrate on riding hard and building my speed up with a bike I love,” he added.

“I’m really excited to start the season knowing that the only thing I have to concentrate on is my fitness and riding.”

Mackenzie will be partnered by current motocross and supercross champion Jay Marmont on the 450 at Kawasaki next year.