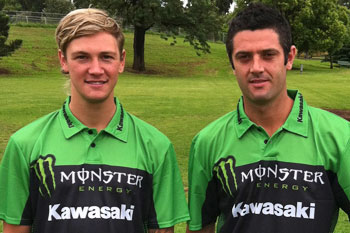 The addition of both Kade Mosig and Jay Marmont will boost Monster Energy Kawasaki to new heights in 2012.

Monster Energy Kawasaki team manager Troy Carroll says that his team is “fine-tuned” for 2012 with the signing of Jay Marmont and Kade Mosig alongside Billy Mackenzie.

Marmont’s signing made headlines nationwide in leading motorsport news publications last Thursday, however it’s the combined team structure of Marmont, Mackenzie and Mosig that has Carroll excited for the new year.

“We’ve really fine-tuned the race team for 2012,” he explained. “I’ve really been happy with the progress we’ve made with the new 450 and we already have one of the best 250’s in the country.

“I’m extremely pleased to retain Billy Mackenzie and really happy that he will be joined by Jay Marmont and Kade Mosig. We’re really looking forward to going racing in 2012.”

The addition of Marmont to Kawasaki makes for an intriguing rivalry between Monster Kawasaki and CDR Rockstar Yamaha, with both going head-to-head on a number of occasions in 2011.

Now that Marmont is part of ‘Team Green’, the momentum could swing into Kawasaki’s favour as they compete with the number one plates that Marmont earned as a Yamaha rider.

Their first official battle will take place at the Australian Motocross Championship season opener in Queensland on 1 April.