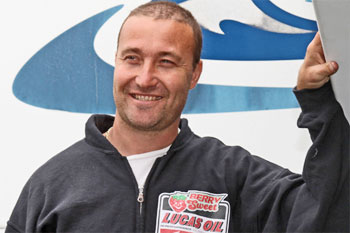 Craig Anderson's team has switched to Yamaha for 2012.

Craig Anderson has revealed that his race team will switch from Honda to Yamaha for the 2012 season.

Along with Berry Sweet Strawberries and Lucas Oil, Yamaha will support the team in next year’s Australian Motocross and Supercross Championships.

The multi-time national champion will once again campaign the Pro Open category alongside Louis Calvin, while rising star Luke Arbon will be the team’s lone Lites contender.

“This is a huge moment for the team and it shows that we’re still moving forward and growing strong,” Anderson explained. “Having Yamaha come onboard is such a positive thing.

“I’ve achieved a lot in my career on the blue bikes, with my best year ever coming on a Yamaha. I’ve ridden the 2012 YZ450F and love it already so it’s a bit like coming home.

“Also, with the support from Berry Sweet Strawberry farms and Dak Wal Engineering increasing this year we’ve got a strong base to work from and that’s the toughest challenge for most teams.”

Anderson is excited to field both Calvin and Arbon alongside him next year, confident that the trio can make an impact in both classes for next year.

“This makes us a title chance in multiple classes,” he continued. “Both Luke and Louis are stars of the future and I’m excited to have the chance to help guide them along the way.

“Just talking about the Berry Sweet Lucas Oil Yamaha race team and the fact that Luke and Louis are signed makes me want to go racing right now.”

The team also recently acquired a new, larger workshop fitted out with a gym, kitchen and conference room.

“We’ll be better equipped and prepared for the coming season than ever before,” Anderson added. “With the new workshop and gym and two private tracks for testing we have the infrastructure.

“With Yamaha we have the bikes and with me, Luke Arbon and Louis Calvin, we have the riders to make 2012 the best year yet for the Berry Sweet Lucas Oil Yamaha race team.”