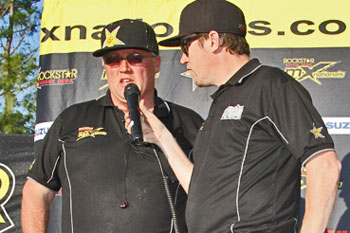 WEM's Kevin Williams (left) is confident the Australian Motocross Championship will be a bumper year in 2012.

Williams Event Management boss Kevin Williams believes that Jay Marmont’s manufacturer switch for the 2012 season will be healthy for the sport in Australia.

It was announced yesterday by CDR Rockstar Energy Yamaha that Marmont will be departing the team (link here) after four years and five championship victories together, with the 28-year-old linked to Monster Energy Kawasaki.

Marmont was unbeaten in the WEM-promoted Australian Motocross Championship during his time with Yamaha from 2008-2011, and Williams says a change in manufacturers for the current champion will boost interest in the sport.

“I saw on the net that Jay is officially leaving CDR and the word is that he’s probably going to ‘greener pastures’,” Williams commented. “Like WEM does every year, we try to improve, develop and change things that add value to the championship.

“Having the defending champion change colours is another tool that we can work from to get fans more engaged and interested in the sport. They’ll be able to bench race, like can Jay Marmont do it again?

“It’s not just the factor of other riders, there’s a new bike this time around. What’s he going to look like on a different bike? How quickly can he adapt? All of those things will add to his desire and give him a new burn in his belly.

“Jay has made a change in a time where many others are as well, so the rider line-up is certainly setting 2012 up to be a bumper year.

“We certainly wish Jay all the best in his decision and he has been a stellar champion – good luck to those who think they’re going to beat him!”

The 2012 outdoor season is expanding to 10 rounds for the new year and commences on 1 April in Queensland, with Marmont’s future expected to be confirmed before this weekend.