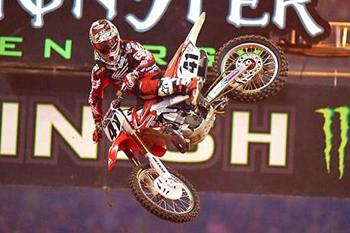 Honda's Trey Canard has reportedly broken his collarbone, according to Racer X Online.

Our friends over at Racer X Online are reporting that Team Honda Muscle Milk’s Trey Canard has suffered a broken collarbone (link here).

While training for the 2012 Monster Energy Supercross, an FIM World Championship, Canard reportedly suffered the injury.

Canard’s rookie season this year was cut short by a broken femur with three rounds remaining. Before that, he won three 450 Class main events.

Upon return during the outdoors, his campaign was again finished early after suffering another broken femur at Washougal.

Stay tuned for confirmation and an update regarding the extent of Canard’s collarbone injury.

The 2012 series will commence in a month’s time at Anaheim in California on Saturday, 7 January.