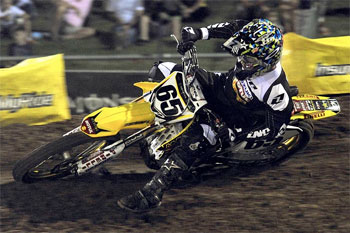 Daniel McCoy is yet to figure out his future despite finishing third in Super X. Image: Sport The Library.

Current national supercross number three Daniel McCoy is yet to lock in a seat for the 2012 season, waiting on key rider movements before he hopes to be signed by a factory team.

The 27-year-old impressed by finishing third in Monster Energy Super X for Motul Pirelli Suzuki, however his future remains uncertain after the team signed Queenslander Todd Waters to a Pro Open contract for next year.

With the possibility of Suzuki expanding to a two-rider Open class effort unconfirmed, McCoy admits he needs to keep his options open this late in the silly season.

With Jay Marmont’s future yet to be decided, many expect remaining seats to be filled once Marmont signs for either Kawasaki or Yamaha.

“We are pretty much just waiting for teams to know where they are at, waiting to see where teams are heading as far as picking riders for 2012,” McCoy said. “Obviously I’m hoping to get a factory ride, so it’s a matter of seeing what happens from here.”

“I’d like to stay on the 450, because I feel more comfortable on them and I’ve had a handful of podiums in motocross and supercross during my career. I’m positive I could be a front-runner in the outdoors on the right bike with the right backing.

“Hopefully I can get something locked in that will allow me to do that next year.”

McCoy has also been linked to the Hart and Huntington team during the off-season, with Airstyle Imports being a major supporter of McCoy in recent seasons.

During his career, McCoy has ridden for factory teams fielded by Yamaha, KTM, Honda and Suzuki, plus had a brief stint with Troy Carroll’s Kawasaki team in 2008.