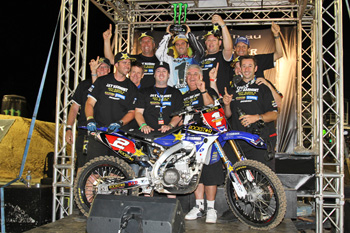 CDR Rockstar Energy Drink Yamaha has confirmed that Jay Marmont will part ways with the team after four triumphant seasons together.

In an official announcement made this afternoon, the team thanked Marmont for winning four MX Nationals titles and a Super X crown during their time together.

Team owner Craig Dack looks back at their partnership with pride that included more than just championship success, with the team having a 100 percent finish record with the ultra reliable YZ450F.

Dack also has no hard feelings towards Marmont as the factory Yamaha team will now restructure with a new rider line up for 2012.

“On behalf of the team, I would like to thank Jay and his family for a tremendous four years in which we both enjoyed plenty of success,” Dack said.

“The partnership worked well but unfortunately has ran its course and as a team we wish Jay all the best with his future endeavours and look forward to competing against him in 2012.

“Bringing a new rider on board is always an exciting time for everyone involved and again CDR will commit its time, energy and resources into building and developing another champion.

“We have the best crew and infrastructure in the pits and the revolutionary YZ450F at our disposal.

“We will announce our full rider and team line up shortly but our team is again committed to ongoing success and will strive to maintain championship winning results in the future.”

Standby for more information to be released soon on the CDR Rockstar Yamaha team for 2012 as the team enters an exciting new period as CDR celebrates its 20th year in motocross racing.

Marmont has been in Queensland testing with Monster Energy Kawasaki during the past week, however his future is yet to be announced at this stage.