Strang switching to KTM in WORCS and Endurocross for 2012 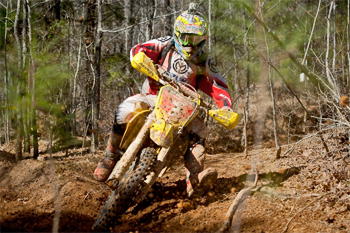 Australia's Josh Strang will switch to KTM for the 2012 season and take on a new challenge.

Australia’s Josh Strang has signed for the FMF/RPM/KTM team for the 2012 season in America.

Strang will contest the WORCS, Endurocross, X Games and limited GNCC rounds for KTM on a 450 EXC, with his former factory Suzuki team not yet confirming if it will continue next year.

“It will be a new challenge,” Strang said. “The team and sponsors helped put a great support package together for the 2012 race season.

“This team has produced a lot of race wins and championships in every division they have competed in.”

Team owner Mike Hurlbert welcomed Strang to the team, a massive coup for his program ahead of the new year.

“Josh is a great addition to the team,” said Hurlbert. “We are all very excited to have Josh on our team and look forward to working with Josh to win races and championships.”

Strang won the GNCC series in 2010, however this year he finished third in the standings following a string of bad luck.