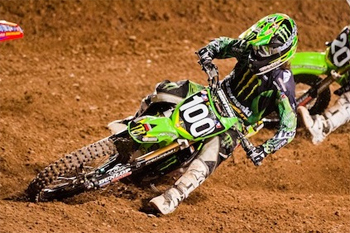 Josh Hansen will return to Hart and Huntington for the 2012 season in the 450 Class.

Hart and Huntington has launched its 2012 line-up during a press conference in San Diego at the Sycuan Casino.

The Dodge Motorsports/Sycuan Casino/Hart and Huntington/Bel-Ray Racing Team now includes a brand new sponsorship with Sycuan Casino for the upcoming season and beyond, as well as a continuing partnership with Dodge and Bel-Ray.

“I’m really looking forward to next season and couldn’t be happier about the talent behind our new team riders and the amazing support of our sponsors,” said team owner Carey Hart.

“These guys have so much energy and passion in their riding that I know a Hart and Huntington racer will make a big impact this season, just like we did last year.

“All of our sponsors are the driving force behind our success, elevating us to the next level and giving us the opportunity to double our team in a time when other programs are cutting back or worse, not coming back out at all.”

In addition, Hart announced that he will be donating the bike he used at the Gravity Games in 2000 to complete the first backflip in freestyle motocross history to GameDay Sports Bar & Grill at Sycuan Casino.

The Dodge Motorsports/Sycuan Casino/Hart and Huntington/Bel-Ray Racing Team will kick off the 2012 season in Anaheim on 7 January, 2012.