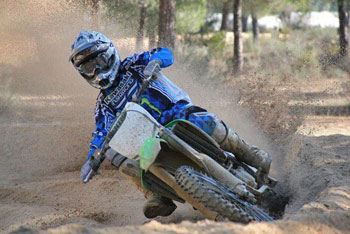 Dean Ferris has been in Spain testing for ICE1 Racing ahead of his rookie World Motocross campaign.

Ferris, 21, rode at various tracks in the south of Spain with the team owned by Formula 1 ace Kimi Raikkonen, marking it as a positive debut with the team when speaking to MotoOnline.com.au this morning.

“I was over there for nine days, just to get a base setting with the bike, and it all went pretty good,” Ferris said. “I just got to gel with the team a bit more and it was good to ride with them.

“I immediately felt better back on the 450 after Super X for sure and it was good to be back on the motocross track.”

“Kimi obviously owns the team, but he has employed a lot of good guys to run it,” Ferris said. “His return doesn’t change anything other than now we’ll have someone to follow in F1 [laughs].”

Ferris will return to Europe towards the end of January and plans to remain there for the entire season, based in Belgium.