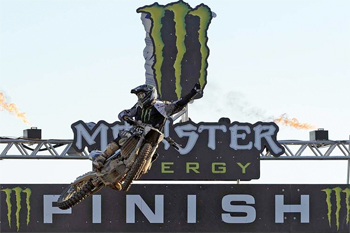 David Philippaerts on his way to victory in Brazil earlier this season.

Monster Energy Yamaha rider David Philippaerts has returned to riding for the first time since suffering breaks to both wrists in an accident while practicing for the Grand Prix of Czech Republic in August.

Philippaerts has been following a comprehensive and carefully planned rehab and recovery process and was relieved and excited to see that the first ride near his home in Borgosesia went extremely well.

“I’m really happy and feel very good,” he commented. “I was a bit scared just before going on the bike because I really didn’t want any bad effects from the injury.

“But we went to a track that didn’t have that many jumps and I was able to hit everything straight away. Afterwards there was no pain or discomfort – it was another important step.”

Former MX1 World Champion Philippaerts revealed that he’s been training on an MX2 bike to rebuild his fitness to date.

“I haven’t ridden my race bike yet,” the Italian added. “I have been building up and have been training with the 2012 YZ250F which has been great because it feels very light and easy to ride.

“The team dropped the bike off a few days ago and I’ve already been out a few times and I like the way it handles and the power delivery.”

Philippaerts, who won the Grand Prix of Brazil this past season, will push full ahead with his program that will involve a two week spell of altitude training in northern Italy.

After that, he’ll undergo a month’s riding and testing with the factory team on the island of Sardinia in January.