Steve Matthes drops in with his latest monthly column for MotoOnline.com.au.

Steve Matthes drops in with his latest monthly column for MotoOnline.com.au.

This column comes to you from somewhere over the Atlantic ocean as I’m heading over to the annual Bercy Supercross held each fall in Paris, France. It’s always a good time with what is the longest running supercross in Europe.

Since 1984, the worlds best riders have descended upon the Palace des Omnisports each year to race what is more like an arenacross than a supercross, but it’s still action packed each and every year.

Outside of Ryan Villopoto and Ryan Dungey (and there’s lots of time left for these guys), there isn’t a legend of motocross who hasn’t set rubber knobby on the soil inside the arena.

This is my fifth time over here (once as a mechanic for Nick Wey in 2001 – third place overall on the weekend, thank you) and it’s fun to see the riders race inside the tight confines of the arena.

It’s also a little more laid back than an AMA race and everyone there is at the race to do well, but in the end, it’s three nights of racing and the guys do the best they can do. 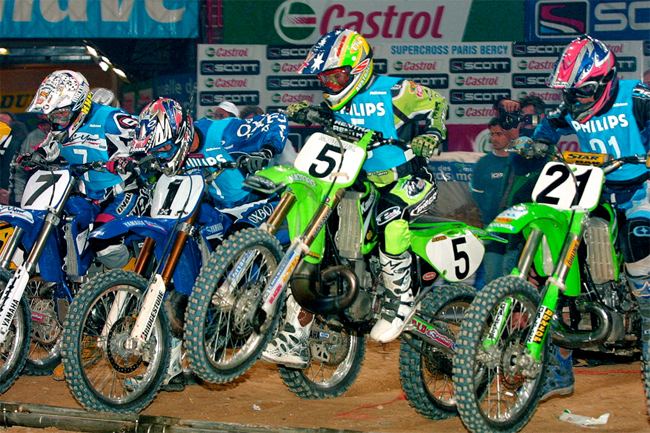 Australia's very own Chad Reed (5) made his mark at Bercy over a decade ago. Image: MXlarge.com.

The chief asked me to write a column about whatever I wanted to so I thought I’d touch on a little Bercy, a little James Stewart and a little bit of silly season stuff.

Justin Barcia of the GEICO Honda team came over last year and won the prestigious King of Bercy title with some great races last year. He was just okay on Friday night and turned it up on Saturday and Sunday to win the crown.

At the time Barcia was on the CRF450R and it was thought that maybe he would have trouble adjusting to the increased power and the tight confines of the arena. After all, Barcia’s not exactly a calm and smooth rider out there!

No matter, he rode his typical aggressive self, got great starts and I came away convinced that his skills on a 450 might even be better than on the 250. Of course we saw him jump up halfway through the nationals to fill-in at factory Honda and run with Dungey and Villopoto this past summer.

I suppose I shouldn’t have been as impressed as I was. After all, I got a sneak preview last year!

My memories of 2001 involve some Australian kid on a Kawasaki named Chad Reed. I’d never really heard of him before, I knew he raced the GPs the previous year to some success, but surely American supercross stars Jeremy McGrath and David Vuillemin were going to show this kid what was up right?

Nope. Vuillemin swept every main event every night much to the delight of the rabid French fans, but behind him MC had some issues trying to keep Reed behind him. There was a long whoop section followed by a left hand corner and on Sunday Reed entered the whoops a few bike lengths behind McGrath in one main.

He got through them a little better and absolutely cleaned The King of Supercross out! I was standing right there and it was mind-blowing to think of someone doing that to McGrath. My childhood ended right there. It was now over – I’d seen it all.

The King was beatable and to make it worse, some dude from Europe was showing no respect. I say “dude from Europe” because he raced GPs and therefore he was covered with that GP blanket. He had already caught and passed McGrath in a couple of races, which was pretty much unheard of.

Back in the pits, ‘the pass’ was the talk. Whispers were going back and forth about what some kid had done to the American hero. I was pitting right across from DV and MC (and on a side note, I should’ve known Wey was going to be in trouble when I bolted on a pipe and silencer and the Yamaha boys had full motors, suspension, clamps and everything).

Shortly after the race, Jeremy got up and did the long walk over to Reed’s De Groot team pits. You could’ve heard a pin drop. Every eye was on Jeremy and he made the walk to chat about the pass with Reed. I don’t know what was said and I don’t know if there was anger there, but I’ll never forget Jeremy McGrath making the walk over to talk to this new kid.

Well we all saw the news, James Stewart is going to JGR Yamaha for the next three years. It was an interesting move on many levels as we all know that Stewart had been riding a Suzuki at home in recent months and that was his preferred bike.

He couldn’t make a deal, was impressed with the JGR Yamaha YZ450F and the JGR guys were making a big push to get the #7 under their awning. Stewart hasn’t raced the motocross series in three years and doesn’t have to with his new team either, but at the press conference he mentioned that they were going to go outside.

What about the fact that JGR is a leading NASCAR team and is going to give Stewart a chance to test in a car very soon to see what he’s got and if he wants to pursue this further? This is a huge year for Stewart and a bit of a gamble to be sure. If you’re a cynic, you say that Stewart couldn’t get paid enough to ride a Suzuki and went to a team that could pay him and he’ll deal with the bike afterwards.

If you’re a super fan of Stewart, you say that the JGR team makes a bitching Yamaha, James changed his mind and the fact that he narrowly missed out on the supercross title this year and now has a better bike – it’s go time! No matter what it is, he’s there for three years and this a turning point for James and the JGR team itself.

What else is going on over here in the AMA series? Well now that the Stewart shoe has dropped, it’s time for some of the other guys to get signed up. Stewart’s old team, the L&M Racing squad dropped the ‘L’ (which stood for Larry as in Larry Brooks, who was let go from the team he started early last year) and brought on a ‘W’ as in Jeff Ward.

Ward, the seven-time AMA champion has came on as a partner with the ‘M’, which stands for Mike Kranyek, who now owns the team with Ward. They look to be on Kawasaki’s and everything I hear has Josh Grant going there. Other things I hear are Ben Townley is signed up to be outdoor-only with the guys and I know that Tommy Hahn is also being talked to for that spot.

Kyle Chisholm seems to be moving over to the BTOSports.com/BBMX Suzuki team to be teamed with Jason Thomas and Michael Byrne. Brooks has resurfaced with a Honda team with Jeremy McGrath as a partner. They have signed Andrew Short and are looking at another rider and Davi Millsaps, Kyle Regal, Hahn have all been linked to that second spot with Short.

Alright, till next month!