Matthes reflects on Team Australia’s MXoN podium after attending the race in France.

Matthes reflects on Team Australia’s MXoN podium after attending the race in France.

Well the green and gold finally did it. Team Australia has finally taken that step onto the podium at the Motocross des Nations with their third place finish at the recent Olympics of Motocross held at St Jean D’angely track in France.

Being from Canada, I can relate with a small passionate group of people who love racing motorcycles and find it a daunting challenge to topple the behemoths of motocross racing like the USA, Belgium and France.

The simple fact that year after year, with a country that has four million less than my beloved Great White North, you Aussies get a properly funded, well-run, professional-looking team with the very best Australia has to offer as far as riders is very impressive.

My country can’t seem to do any of that year after year which makes me want to vomit all over myself repeatedly. But I digress.

Australia has long had some top-notch riders from early American pioneer Jeff Leisk to Craig Dack (who raced some GPs), to Michael Byrne, to Andrew McFarlane, to Chad Reed and Brett Metcalfe (whatever is in the water down there, keep drinking it everyone). 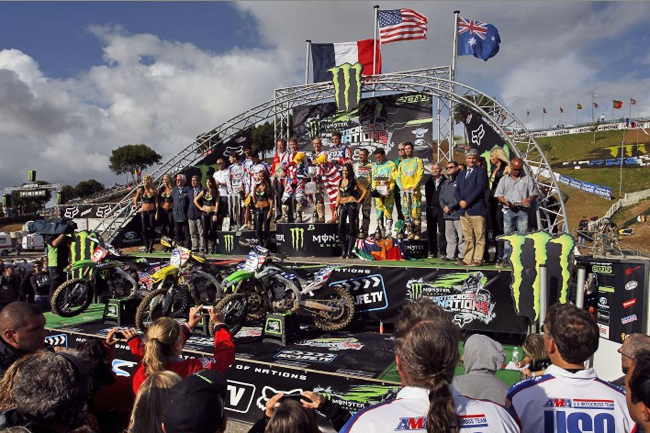 Team Australia stands tall on the 2011 MXoN podium alongside USA and France.

But success at the biggest motocross race each year has always seemed to elude them. The team of Jeff Leisk, Craig Dack and Glen Bell ended up fourth in France in 1988 and that’s been about it.

Dack, now a successful team owner in Australia was asked about that day in France and how the team did.

“To be honest I remember very little about the specifics of the event back in
1988 apart from Leisk was very strong riding factory Hondas,” writes Dack in an email. “Glen Bell did a great job also and I was somewhat the weak link that particular day. I remember a massive crowd with a great atmosphere. I think we tied for third place but were officially fourth.”

When asked about the reason for the bad luck over the years at this race as well as his friendly reminder to Reed about his results, Dack is pragmatic.

“I have always, since Chad had been selected for Team Australia, needled him about our result in 1988. Not only is that the Australian way but I know how to drive Chad and every time I would mention it I could see the steam coming out his ears.

“Why its taken so long is a good question which I have no answer, apart from its not an easy event you have all the best riders in the would for that one weekend a year. A lot does depend on what happens to other teams during the weekend that affects your result, it’s tough.”

Australia’s luck (or lack thereof) had gotten to the point that year after year, I would get on Reed and Byrne about the country’s lack of podiums at the MXDN and the incredibly bad luck that has hounded them each year.

In 2001, when the race was at the legendary Namur circuit, Australia had its first breakthrough since that day in France when a then-unknown Reed won a moto. Unfortunately teammate Byrne broke his wrist in his first moto and the team was down a man.

The second time the race was held in American soil with the U.S-based Aussies expecting to do very well at the Budds Creek circuit ended in another disaster when McFarlane crashed half-way down the start straight in the very first moto of the day.

Donington, England, in 2008? After qualifying second on Saturday, the team underperforms and crashes its way back. The next year in Italy, things were looking good until Byrne got cross-jumped in the air and was forced out of both of his motos. It was one thing after another.

Reed was winning titles in America, Byrner, McFarlane and Metcalfe all making podiums but yet nothing. Not even a stinking podium. 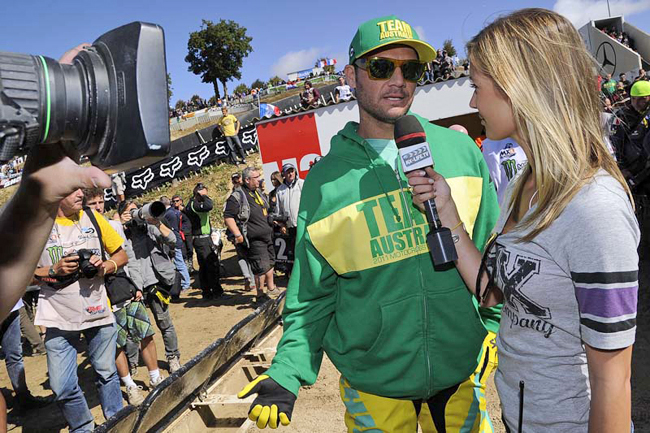 Chad Reed is now officially Australia's greatest MXoN contender of all time, with two moto wins and an overall podium to his name..

The 2011 edition of the MXDN started off with a bang as Reed grabbed the lead early on in the combined MX1/MX2 race and won in a convincing ride. Team USA’s Ryan Dungey was making some time on Reed when the rain started coming down.

Reedy handled it much better than Dungey and stayed about the same while Dungey went backwards. Matt Moss was a bit of a question mark going into the race (Moss was the Australian MX2 champion but had not raced on a stage like this before) and truth be told, he had a rough race. But no matter, there’s always a throwaway score and Moss’s first moto was sure to be the one right?

But oh no, the black cloud of bad luck wasn’t going to be vanquished with Reed’s win. No sir. It came roaring back worse than ever when Moss’s KTM 250 would not start on the starting line for the second moto.

And it never did fire as the gate dropped and 39 of the 40 riders commenced their race. Moss’s first moto score would have to be held up and MX3 rider Brett Metcalfe needed to step up. But you know what? That’s exactly what happened.

Australia avoided any other pitfalls and backed by Reed and Metcalfe’s races, it was a third on the day for Team Australia. It could have been even better as one point in the third and final moto, Australia held second place but then Reed tipped over followed shortly after by Metcalfe going down while up with the leaders.

The bad luck for Australia was still there, the gremlins still reaching out and trying to get Australia in its grasp. But this year the guys fought it off to stand among the three best motocross countries in the world.

For sure guys like me that aren’t from Down Under said that it’s about time that happened. We’ve all known how good the Australian riders are and finally they showed it.

Reed spent the press conference and his time with the media making sure that while he was happy, he was thinking of his friend (and multi-time Australian team member) McFarlane who tragically passed away in a racing incident last year while racing back home.

Another rider, with seven cracks at doing it and left off the team this year is Michael Byrne who when I talked to him about it was pumped for his mates.

It is too bad Sharky wasn’t there to see it but somewhere he’s looking down and tipping his hat to be sure, while Dack – the man who helped set the bar so many years ago – was happy to see this record of his fall to the wayside.

“I’m so proud of the boys this year and wish to congratulate them on the result,” he added. “Also I’m happy for Gary Benn the team manager. Gary is a good friend of mine who has done this job for 13 years I think, so good on him and congrats to all the guys.”

And I think I can speak for an entire country when I say it’s about time!