MotoOnline.com.au speaks to the Red Bull X-Fighters star ahead of Sydney’s season finale.

Just a few short weeks ago, Spaniard Dany Torres’ hopes of taking the Red Bull X-Fighters title from American Nate Adams was slim. That was until Adams injured him arm three weeks ago…

Now, Torres will be crowned king if he can place inside the top four tomorrow at Cockatoo Island, with Adams only expected to make the start for a base of five points before pulling out of the proceedings.

After that it will be up to KTM ride Torres to put his best foot forward, which he has done on two occasions this year by winning in Dubai and again in his home round of Madrid, Spain.

MotoOnline.com.au caught up with Torres today ahead of qualifying to find out how he’s enjoying Australia, what he thinks of the Cockatoo Island course, and what his game plan will be for tomorrow afternoon. 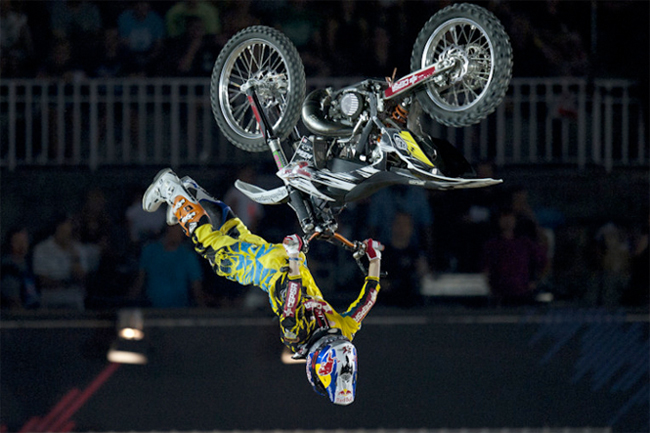 Dany Torres on his way to the victory at Madrid's Red Bull X-Fighters round. Image: Red Bull.

Welcome to Australia, you had your first experience of the course yesterday, so how are you enjoying Cockatoo Island so far?

Yeah, this is my first time here in Australia. Yesterday in the first practice I checked out the track and it’s really funny.

It’s difficult because there is a double-double, which generally is very difficult. It’s going to be funny [to compete on].

As far as the championship goes, you’re in the battle with Nate Adams, but his injury makes it a little easier for you. What’s the plan for tomorrow?

Yeah, now I’m thinking that the qualifying is the more important round. I know that Nate is injured right now, but this year every rider has had an injury.

It’s been tough for everybody. I have to do a good qualifying run today and then will be waiting for tomorrow.

And the X-Fighters is your main priority during the season, so this championship’s ultra important to you…

Yes, the Red Bull X-Fighters is the most important championship for me because I think that here are the best riders in the world, in this championship. It is very, very important for me. Torres is in Sydney and says the course for this weekend will be a challenging one. Image: Red Bull.

When you come to international events like the one in Australia, is the bike you’re riding your regular one or do you just bring parts to use?

When I come to Australia I bring my suspension, my plastics and my handlebars. KTM gave me a bike here, then I put my things on that and compete.

How about after the event tomorrow, will you stay in Australia for a vacation or head home directly afterwards?

No, when I finish here in Australia I have another show in Spain. Maybe I would like to stop for one or two weeks after that, because I need to stop to get fit again.

Okay well thanks for your time, all the best for this weekend.

Did you miss out on tickets to watch the Red Bull X-Fighters live in Sydney on Cockatoo Island? Never fear, because it’ll be broadcast live around the nation. Here’s where you can tune in…