MotoOnline.com.au speaks to Aussie AMA rookie Tye Simmonds following his best round yet at Spring Creek.

Rookie AMA Pro Motocross Championship contender Tye Simmonds scored his best results yet at the Spring Creek round last weekend, a good start to the series’ second half.

Originally from Bourke in outback New South Wales and now based in Southern California, at just 19 years of age the JDR/J-Star/KTM rider has had a steep mountain to climb in the 450 Class during 2011.

Despite a bout of Bronchitis and Rhinosinusitis that ruled him out of Budds Creek and Thunder Valley, Simmonds is finally getting momentum and luck on his side.

MotoOnline.com.au called him this morning (late afternoon in the U.S.) as he was watching a replay of Millville, to get his thoughts on his 9-12 finishes. 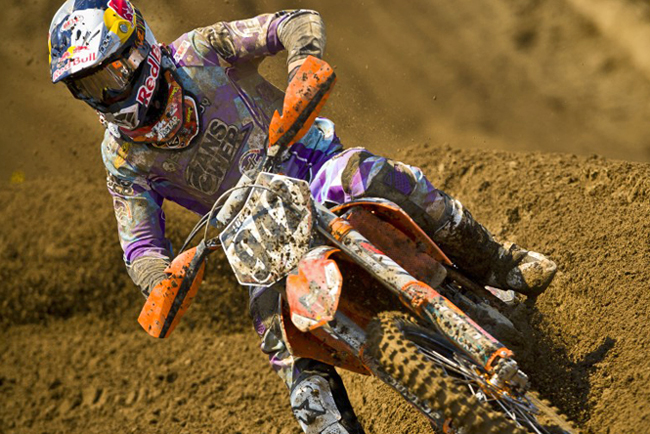 The weekend saw you gain your best moto result of ninth at Milliville, finishing 12th overall, so you must be pretty happy with your progress at this point?

Yeah, I was. Going into the first moto I sort of didn’t know what to expect. I had a pretty good qualifying time and qualified 16th, which was the best I’ve done all year, so we started off the day really well and I didn’t think it was going to be as good as it was.

It was so cloudy and overcast when we went out for practice, so how it didn’t rain I have no idea. It sort of all cleared up and in the first moto I got what I thought at the time was a crappy start. I come around and found out I was in 12th, so I was pretty happy with that.

The sand whoops definitely helped me out through the day and that’s where I made all of my passes. Overall I’m pretty stoked on the whole weekend. After that first moto, being so hot, I got a little bit sick and was kind of contemplating whether or not to go and ride the second moto.

I ended up going to do it, but I was a little disappointed with it. I passed [Jimmy] Albertson at one point, but I sort of faded in the last 10 to 15 and he got me back. It would have been nice to get that top 10 overall, but anyway, it’s all good.

It looked like it was tough out there, in hot conditions on a really rough track. How are you adapting to that side of the racing over there compared to back here in Australia?

Yeah, mate that’s the biggest thing I struggled with on the weekend. I came off after the first one and was dizzy and had a bad headache. We had an ice bath for after the motos to get into and when I got into it my chest tightened up really bad and I was half choking.

It was a little bit weird and I spewed up twice, so like I said, I was contemplating whether to ride the next moto or not. It was the same deal after the second moto, I spewed again, and it was just a hard weekend being summer over here.

The heat’s not too bad, it’s just the humidity that kills it. With the heat and humidity on the weekend, I think it was like the equivalent of 52 degrees Celsius on the heat index – it was gnarly!

You’ve been gaining momentum each weekend, so how much is that experience helping you, and do you feel like you’re starting to find that consistency over there in yourself?

I do, yeah. Every time I seem to get on track and get stuff going, something seems to happen. You know, I got sick a couple of weeks ago, but these last couple of weeks have been really productive.

We had a weekend off and I got a really good week in, so that helped a lot. RedBud was alright, I sort of didn’t get the results I wanted to, but going into Millville I only rode twice during the week and felt a bit fresher.

I definitely think that helped as well, so I’ll do that going into Washougal next weekend.

I think I’m getting there though, progressing slowly and just learning bit by bit. I’m really looking forward to these last five rounds to see if I can get into that top 10 again and try to stay consistent. Hopefully I can be in there.

How’s the 350 in the nationals over there? I saw in moto one you were battling with Andrew Short there for a while, so how do you feel the bike is over there in those conditions?

It’s good mate. It’s going really good and I’ve been getting some decent starts. I’ve been around 15th, so I was happy with that considering how big I am, but where the bike really helped me last weekend was in the sand whoops.

I was really happy with the bike on the weekend, it was good. 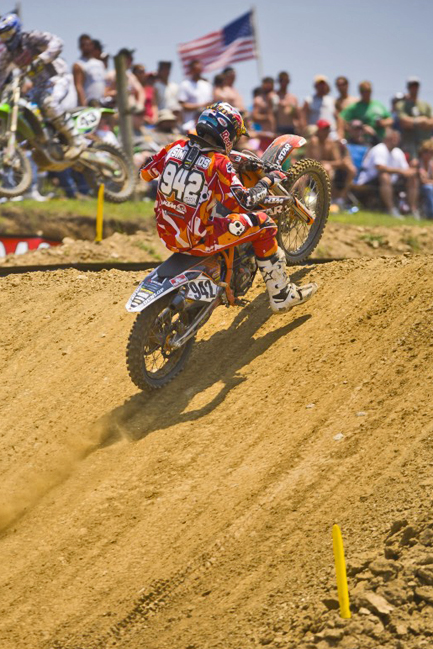 Simmonds is really starting to find his feet in the U.S. as the outdoors enter their second half. Image: Hoppenworld.com.

Now that we’re in the second half of the season and you have a top 10 finish under you belt in a moto, do you feel like you’re starting to belong there amongst the world’s best riders in that 450 Class?

It’s kind of weird you say that, because I remember in the first half of the first moto about 10 minutes in, whenever I think is when I get arm pump, whether it’s nerves or whatever.

I was thinking has somebody crashed, or is there someone coming through, or what’s the deal because they were all pretty much in front of me.

I got arm pump and got a little bit tired, but about 20 minutes in I said to myself that I belong here, I shouldn’t be worrying about these guys and that I should be there every weekend.

That kind of helped out a lot and I think I’m starting to process that in my mind. I belong there every weekend and I just have to do my best to stay there.

Just to wrap things up, we’re in the second half of the season now, so would you say Pala’s season finale will be the one where you really want to perform since it’s so close to your home over there?

Yeah, I do and I’m definitely looking forward to Pala. It’s going to be interesting to see what that track’s like on race day because it’s kind of funny – some days it’s awesome and other days it’s not that great.

But like you said, being my hometown race over here, I’m really looking forward to it and definitely getting a good result there.

There are four more rounds to go before then though, and even Pala will be a new race to me because they’ll change it up a bit for the national.

In these last rounds I’m just going to try and do my best, hopefully try to get in that top 10 again.