As the reigning dual Australian Off Road Champion, Toby Price wanted and expected to head overseas for 2011. For whatever reason it didn’t happen, meaning his closest rivals at home would have to face him yet again.

So far this season, Price has again stamped himself as the class of the field, albeit with a little bad luck on his side. That all changed last Sunday however, when the Motorex KTM Off Road Racing rider wrapped up a second straight Australian Four Day Enduro.

After winning the Hattah Desert Race and A4DE on successive weekends, Price has made 2011 one to remember already, but it’s now the AORC crown that he wants for a third time as he sits second in the standings behind Yamaha’s Chris Hollis.

MotoOnline.com.au caught up with Price today to see how he’s feeling after the A4DE, plus to get his thoughts on a number of other recent events including Hattah and the Finke Desert Race, which Toby was forced out of while leading last month. Toby, first up, congratulations on the A4DE win last weekend in Mackay. It sounds like you dominated the event once again.

Yeah, definitely. It was a tough event, trying to back up the racing from Hattah the week before. It was pretty tough, but great to get the win again and have that number one plate two years in a row. It’s a great feeling.

What kind of strategy is required to win the four-day? Is there a strategy, or do you basically have to go as quick as you can for the entire week?

This year I had a few injuries coming from Hattah, so in the first couple of days I just made sure I stayed on the bike. I didn’t want to lose too much ground because the boys were going pretty quick, so I did the best I could and tried to heal up.

On day two and three I pulled a bit of a lead, then into the final moto I had a bit of a buffer. I got through the event and did the best I could. I got the holeshot and did the usual, was able to stay there and it was good.

This year you were on the 350 EXC-F, KTM’s all-new off-road bike, so does that make winning events like the A4DE even more special for you against larger capacity bikes?

Yeah, for sure. It’s a great bike, and coming into the four-day we’d never really ridden the bike for that kind of event, so we weren’t sure how it’d go. I barely even threw a spanner to it, just changed the tyres and the thing was unreal.

I can’t fault the KTM 350 one bit – it’s been a great bike and has made my job a whole lot easier.

The week before the four-day you won the Hattah Desert Race, so how was that? Another big event on the national off-road calendar.

Yeah, it was a big one on the calendar for us. To win that and keep my number one plate there was good, so at the moment everything’s working out well.

It was a shame with how Finke turned out, but that’s just how things go and that way things happen sometimes. We’ll just have to wait until next year and have another go at that.

So yeah, just taking things one step at a time and do the best we can at each event. Now we just have to concentrate on the Australian Off Road Championship and see if I can make up the ground I lost at the first round. 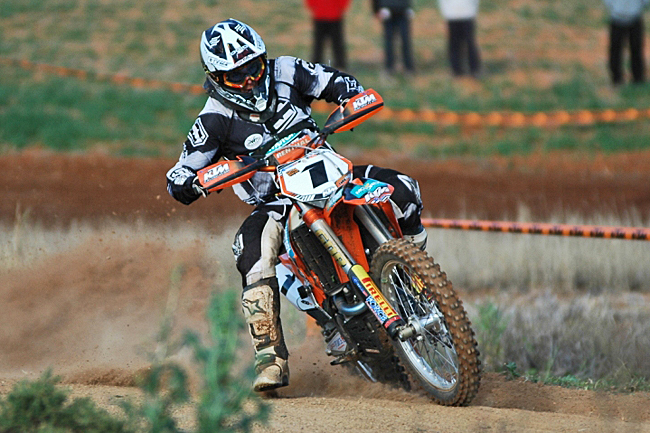 Price on his way to back-to-back victories at the Hattah Desert Race earlier this month.

Now you’ll start focusing on the AORC once again, which I guess you’re still the favourite for despite the fuelling error at the opening round. How’s that series coming along? It’s shaping up well as long as the weather goes according to plan…

I’m looking forward to getting back into that now. Out of the four rounds we’ve had I’ve won the last three and am back within a chance of the title. I’m only like four or five points off the championship Outright and 12 to 14 in class, so it’s not out of reach.

It was looking pretty grim at the start of the year after that first round, but I just have to keep working hard at it and hopefully I can pull it off. If I can get that win hopefully it’ll make it even more special.

This year the AORC has guys like Chris Hollis and Glen Kearney back from overseas, so will winning against even tougher competition rank this title up there as one of your best if you can get it done?

With those guys back this year it’ll definitely be up the top of my list as one of the best ones to win. Last year it wasn’t the walk in the park that it seemed to be, the guys were still really fast and kept me honest.

It’s never easy, but to win against those guys this year would be the best feeling ever. I’ve got the four-day under my belt now, so if I can win the AORC this year will be a huge one, that’s for sure.

Okay well best of luck and thanks for taking the time out with us this afternoon!