MotoOnline.com.au speaks to Matt Moss about Wodonga’s MX Nationals round, plus his 2012 aspirations.

Make no mistake, Matt Moss is the class of the Pro Lites field in the 2011 Rockstar Energy Drink MX Nationals. With four round wins from seven attempts, Moss is the clear favourite to take his second outdoor crown.

This season hasn’t been a walk in the park for the JDR Motorex KTM rider however, struggling through a shoulder injury suffered before round four and seeing his title lead shrink at that stage in the series.

Victory at Wodonga has handed Moss a commanding lead of 58 points with just two rounds to go now, and he achieved last weekend’s feat without winning a single moto.

Moss is an improved kind of rider both on and off the track this year, focused on the job at hand and doing everything he can to ensure the JDR Motorsports outfit rewards him with a position on the U.S. based JDR/J-Star/KTM squad for 2012.

MotoOnline.com.au sat down with Moss on Sunday afternoon and spoke about his current form, plus what it will take to finally make his mark against the world’s best in the AMA next year. At Wodonga you used consistency to win, which is important with the MX Nationals formats, so I guess the championship’s back on track and you must be pumped with that?

Yeah, really pumped! My starts sucked all day, I was mid-pack every start. I just fought, you know. In the first two motos I didn’t go the best, but I got two thirds with a crash in there.

I hurt my shoulder and in the last two I was like 10th out of the gate. I felt really good, started picking people off and the bike was awesome.

Two second place finishes were great in those last two motos. I felt like I could have caught the leader and make the pass if I had another lap or two, but we made up points in the championship and there are only two rounds to go.

I’m looking forward to Moree, I’ve never raced there before, so we just want to win this championship and grab that number one plate.

You won the first three rounds of the year and then didn’t win the next three, with a few injuries in between. How are those injuries now, all healed?

Ah, they were coming into this round, but then I hurt my shoulder again. I’ll probably have another week or two off and then hopefully come out swinging for Moree.

As I said, I’ve never raced there before, but [Jay] Marmont’s given me the heads up and said that I’ll love the track because it’s my kind of dirt and my kind of track.

Obviously the championship is your main goal no matter what, but if you can pull it off does that boost your chances of being selected by JDR to race in America next year?

You’ve gotta go to America 100 percent confident to even get close to those guys and I think Supercross is going to be a good thing for me. It’s my kind of thing that I really like to do and I really want to win that Super X series.

Hopefully I can go 1-1 in supercross and motocross, then after that I just want to go to America and win a supercross season. That’s exactly what I want to do and I’m doing all the right things right now, so…

Do you feel as though JDR’s structure with a team in Australia and the U.S. is just what a young Aussie like you needs to make that transition to the AMA as smooth as possible?

It is because it’s pretty much like going over there and hopping on the same team. We get the same support they do over there, even the same bikes.

The bikes are great, and you know, America is a big deal. Everyone over here thinks it’s not as big as what it is, but those guys are super fast.

You just need to do the right things to get over there and then to try beat those guys you need to have good support. I think JDR has that and not swapping bikes or changing to a 450, staying on the same bike and racing there will be the best shot for me.

If I’m going to do it then it has to be now and I just really want to – hopefully we can do it. 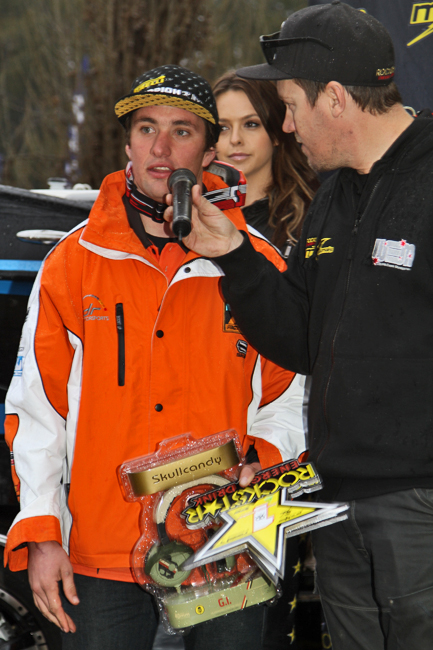 Moss has been working hard both on and off the track with JDR this year, all but confirmed for the U.S. in 2012. Image: Alex Gobert.

Is your confidence and form back to the level that it was in 2009 on the Suzuki when you did win both the outdoors and supercross titles?

It is, you know, I’m confident in my bike and confident in me. It’s just that some bad things have gone down and I haven’t been riding like I should. But this weekend I felt like I rode good in those last two races. I just need to get back to riding the way I was, with no mistakes and injury-free.

My shoulder’s niggling me at the moment, so that will be good as soon as I’ve got that out of the way. We’ve got three weeks off now, so I’ll give it a bit of a rest and then get out there to try and win.

Just finally, it seems like this year you’re not only winning and doing good, but with the media and your fans you look like you’re really enjoying that. Is that part of preparing for America with all the fans and more media outlets? Is that something you have been focusing on?

Definitely. Our team is so professional and coming into the year they sat me down and said no partying, no doing anything stupid, or anything like that. I’ve got the team riding on my back and I’m supporting JDR Motorex KTM. I can’t do anything wrong.

Media is what gives you your name and you have to do it, plus I enjoy doing that side of it all now. Your fans are your number one supporters. If you have them behind you then it makes you feel good, with people coming up and asking for your autograph.

I try and do as much as I can for the fans and all the media people out there. I’m working on it for America because it’s full on over there and they ask you some trick questions, so I need to be on it [laughs].

Okay sweet, well it’s definitely all paying off for you, thanks!

No worries, thanks for that.