Husqvarna have released details on their 2012 range of two and four stroke enduro machines.

Husqvarna have released details on their 2012 range of two and four stroke enduro machines. As with all Husqvarna 2012 versions, the TE250’s chassis is now painted black, and has been reinforced at the steering head area with 25CrMo4 chrome-moly steel plates to improve structural rigidity.

It also receives silver Excel hubs, moulded-in graphics and new handlebar clamps, all changes which are seen across the model range.

The TE250 receives a new Kayaba rear shock, while the 48mm Kayaba forks see new springs and internal settings to match the shock.

The cooling system now has a thermostat and electric fan to prevent overheating in any situation, while a double mapping configuration of the control panel is now provided (soft/hard), controlled by a switch on the handlebars. The TE310 shares many of the 250’s changes for 2012. These include the generic frame, hub and bar mount modifications, as well as suspension, cooling system and ignition mapping switch. The main areas of improvement for the 2012 TE449 can be seen in the chassis and suspension department. The 449 has received strenthening of the steering head, seat rail and engine mounts, while the rear section is now stronger and more streamlined.

The new Kayaba rear shock has been shortened by 4mm to further reduce seat height and is also now shielded better, while up front the forks receive more progressive damping.

These design upgrades compliment the Coaxial Traction System (CTS) which puts the pinion of the final transmission coaxially in line with the swingarm pivot.

This minimizes chain torque and its effects on rear suspension and therefore on handling. It also allows for the motor to be set further back on the frame and tilted further forward, lowering the bike’s center of gravity.

The 2012 TE449 also sees a new lightened and simplified electrical system, while the cooling has been improved by introducing a new WP radiator. 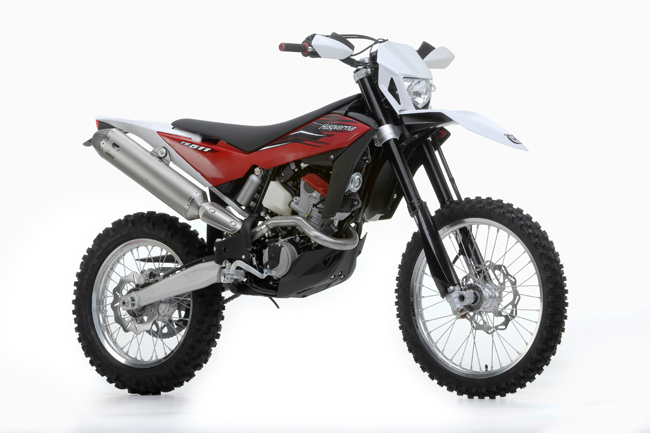 The biggest of all Husqvarna enduro models, the TE511, received the same cosmetic upgrades as its younger siblings, as well as sharing the chassis, electrical and cooling upgrades bestowed on the 449.

The emphasis for the 2012 TE511 has been put on taming the power of the huge motor. This has been achieved by developing new mapping of the Keihin fuel injection, with the aim being to produce a more linear and progressive power delivery. For 2012 the two stroke WR250 remains relatively unchanged besides sharing the across the board cosmetic updates.

It has however received the previous version of the Kayaba fork, and a new Ducati Energy ignition.

The end result is a tried and true economical performer that will continue to be popular with the two stroke fans. 2012 sees the largest two stroke in the Husqvarna range, the WR300, largely unchanged,

Receiving the same facelift as its counterparts, it continues to be a popular two stroke enduro machine, loved for its lightweight and power by average riders and pros such as Sebastien Guillaume alike.