MotoOnline.com.au catches up with the South Australian following his home round sweep on Sunday.

Last weekend’s Murray Bridge round of the 2011 Rockstar Energy Drink MX Nationals will rate as one of Kirk Gibbs’ finest of his career, the local favourite winning all four Pro Lites motos to seal his first overall of the season on Sunday.

The 21-year-old Serco Yoshimura Yamaha rider, now based in Queensland, put in a flawless performance ahead of his family and friends from down south, also boosting him right into title contention as the season approaches the halfway point.

Victory for Gibbs on an off day for title leader Matt Moss saw him close the gap from first to second in the series to 37 points, an amount that is far more attainable than the 85 point advantage that Moss had entering the round.

MotoOnline.com.au spoke to Gibbs directly following the round to find out just how much the victory meant for him in the series first appearance in South Australia since 2009. Gibbsy, you don’t live in South Australia anymore, but you do have a lot of family and friends here at Murray Bridge. It must be a great feeling for you to take the victory…

Yeah, of course because I had all my family here and a lot of mates who came to watch as well. It was good and definitely a lot of support, I could hear them when I was riding around and that was unreal.

Is this a track that you’ve ridden much before, at Murray Bridge?

Back in the day, yeah it was one of the tracks that I’ve ridden heaps, but I haven’t ridden here since the nationals in 2009 from what I can remember. You could call it a home track, but it’s not really – it’s just on home soil!

You said coming in that you needed to improve you starts and you did, so it looks as though that paid off for you this weekend.

For sure, it just goes to show today that if I start in the top five or three that I can run up front. I definitely know that I have the speed now and always did, I just needed to get them starts right.

I went back and evaluated what we had to do in the last four weeks, so it definitely paid off. 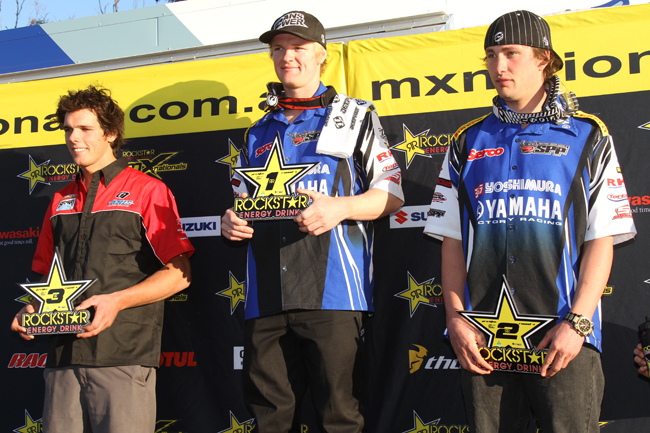 Not only did you have a great weekend yourself this weekend, but luck seemed to be on your side with Matt Moss finishing down in seventh. You’ve closed the gap from 85 points to 37, so was that a surprise for you to get it down that low?

Yeah, it was. Everyone’s going to have their bad days this year and he’s had three really good rounds. I’ve had two good rounds now and two bad ones, so yeah, I just want to keep chiseling away at that lead.

Is it a case of seeing the light at the end of the tunnel for you, being so much closer now than what you were?

Yeah, I mean it’s a long series and we still have five rounds to go, but I’m super pumped to get these wins, plus get the good starts that we had today. I’m just going to take that confidence and try to keep the ball rolling.

Just finally, we have Toowoomba in a couple of weeks and you live up in Queensland now, so can we expect more friends supporting you at that one?

Yeah, I have a few room mates and stuff who are going to come down and cheer, so they’ll probably get pretty drunk and hopefully paint my name on themselves!

Sweet! Well we look forward to seeing you up there for that one.

Cool, thanks a lot for that.