Ever wonder what Yamaha’s Under 19s riders’ bikes are like to ride? MotoOnline.com.au found out!

Australian motocross is booming right now, from a professional level to the rising stars of the sport. International interest is high and there is the opportunity to become a pro dirt bike rider on a domestic level like never before.

With outright growth comes the need for future investments, and that is exactly what Yamaha Motor Australia is doing with a variety of programs developed in a bid to produce the next stars of the sport.

At the height of Yamaha’s development programs in Australia is the GYTR Rockstar Energy Yamaha team, which contests the Under 19s category in the MX Nationals as well as the Pro Lites Super X series.

It’s a low pressure platform that’s set up as a springboard to stardom, ranking as the final step for up and coming racers before they’re transferred into the big leagues of Serco Yoshimura Yamaha and then, eventually, the CDR Rockstar Energy Yamaha team.

Rise to the challenge and you’re set for success. If you fail, at least you had the most complete support one could want to see if you have what it takes at a national level.

Based in Queensland and managed by former pro racer Scott Bishop, the GYTR Rockstar Energy Yamaha team this year features a downsized two-rider effort of Luke Arbon and Shaun Redhead.

Both have junior national titles to their name and both are on track to be the next big things in Australian motocross. In many ways, the world is at their feet if they continue their climb to the top of the sport. MotoOnline.com.au joined Bishop and Arbon in Queensland directly following Raymond Terrace’s round of the MX Nationals for a number of sessions aboard the team’s fleet of YZ250Fs for a unique mid-season test of sorts to see how the bikes stack up.

With the test taking place on the same day as our Serco Yoshimura Yamaha Race Test, it also gave us an insight as to the differences between Yamaha’s factory bikes versus the development models.

Surprisingly enough, there aren’t any major differences from the hot seat, with Serco building and developing the development team’s engines, although GYTR exhausts are used rather than the Yoshimura units found at Serco.

It’s slightly louder when onboard, but the powerband is ultra responsive just as it is on the Serco rides – even if it is said to be a slightly lower overall specification.

As you could expect, the carburettor is finely tuned considering the YZ250F’s lack of EFI, and even Arbon says it’s not a problem for him despite spending the final half of last year aboard the fuel injected 2011 model KX250F.

Ergonomically Arbon’s ride feels more refined than Redhead’s and the team says that’s typical of the talented South Australian due to his additional experience. Where Arbon’s bike feels completely natural and similar to what I like myself, Redhead’s ride is that touch rawer and has the feel as though he just rides the wheels off what he’s given in some ways (as many kids tend to do!).

Both have Fox suspension including fork internals valved by YMA in the front, as well as a Fox shock in the rear. In comparison to the Serco bikes of Kirk Gibbs and Ford Dale (which both have Factory Connection internals developed by Serco in-house) they feel slightly softer, although at my non-pro pace it was relatively comfortable from the outset.

Stability was impressive at speed and the turning capabilities of Arbon’s bike were particularly impressive for me, and feel closer to the standard model than what Redhead’s set-up does.

The best thing about team race bikes though is that everything is ‘tight’, it all works together well and you know that the ultimate effort has been put forward to make them as competitive as can be on race day.

That’s where the advantage lies for Yamaha’s young guns, having immaculately prepped bikes on any given race weekend and a supporting team to help guide them through the process. 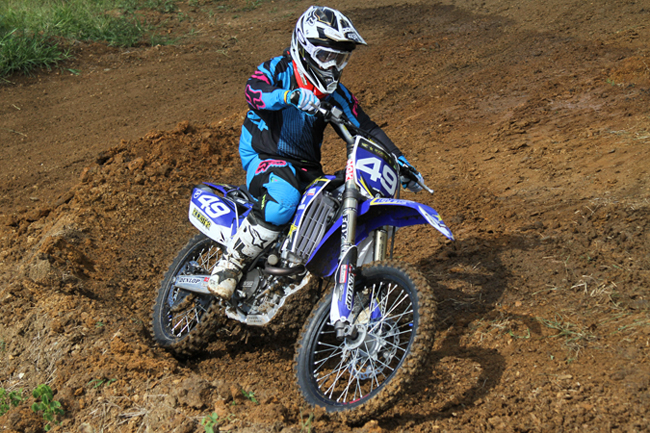 Both the bikes of Luke Arbon and Shaun Redhead (pictured with Gobert aboard) are immaculately prepared and are superb to steer. Image: Guy Streeter.

“At Yamaha we’ve created a race team, or at least an infrastructure, to support every class of racing from junior development, to Under 19s, to Serco in the Lites and then to CDR in the Open class,” Bishop explained.

“Somebody like Ford Dale has been through all of those steps effectively and now finds himself back at Serco, so the system does work and it will continue to work as long we keep providing the right infrastructure and equipment for the riders.”

Another advantage is that the development riders get to see first hand exactly how the likes of Marmont, Josh Coppins and the other fully-fledged factory riders operate during the season.

“We work very closely with both of the teams above us and our riders get to see how riders from Serco and CDR function at the same time, so then they’re aware as to what’s expected from them,” Bishop added.

“Our role is to take them from up and coming racers and prepare them to become competitive Pro Lites riders by the time they’re finished their program with us. My goal is to make them better riders and better people within the industry, so then they’ll be able to cope better down the track with being a professional athlete over time.”

While the team is Yamaha’s great hope in the Under 19s category – an important championship in itself – at the MX Nationals, come the end of the year when supercross starts they actually go head-to-head with the Serco team in the Pro Lites.

Still, there’s far less pressure to perform in Super X for the GYTR Rockstar Yamaha team riders, and Bishop says it’s just a bonus if they do happen to challenge for top positions.

“It’s still the same concept because it’s Serco’s role to win this races and it’s our role to back them up in a sense,” he explained. “If we’re lucky enough to come across the right guy at the right time and he does well then that’s even better, but if not then they’re certainly not under the pressure that the Pro Lites guys are. It’s a chance for them to learn, understand Supercross and then be ready for when the big time comes.”

Support for the team has been positive from Yamaha and its subsidiaries, as well as having the backing from Rockstar Energy Drink – a brand that fits right in with the young guys on the team.

“For us the support has been very good and we’ve been involved since 2007,” Bishop said. “We’ve been able to build relationships at Yamaha and all of its sister companies – GYTR, Yamalube, Axo, EKS, Shark and all of the brands that Ficeda do. On top of that we have the involvement of Rockstar Energy and Galvin Constructions, which are very significant to us.” 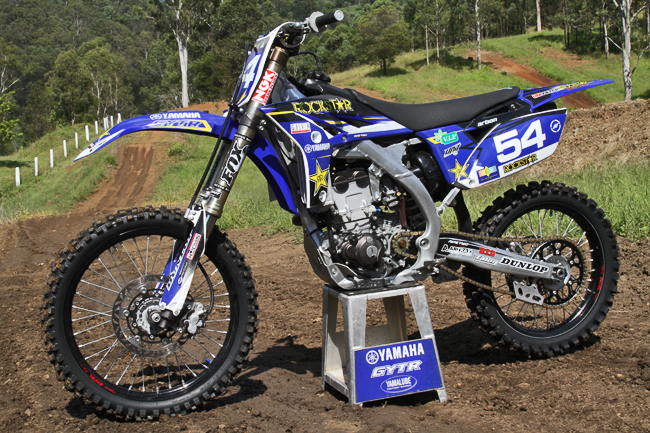 Based in Queensland, MotoOnline.com.au was lucky enough to seal a mid-season test with the GYTR Rockstar Energy Yamaha squad. Image: Alex Gobert.

In speaking to Arbon at the test it quickly became clear that he feels right at home with Yamaha, the purpose-built Under 19s team suiting this vital stage of his career. He’s not too picky about his bike and says he felt comfortable from the outset since joining the team.

“As long as the bike has low handlebars then I pretty much like it,” Arbon laughed. “I was used to the Kawasaki, but once I got onto the Yamaha I loved it from the get go. The stock bikes are a little bit slower than the race bikes, but it impressed me straight away and I think the YZ250F handles really good. I couldn’t really ask for much more in my race bike, that’s for sure.”

Arbon currently sits second in the title chase after winning round one at Broadford on debut with Yamaha, and in his last year as an Under 19s rider, he’s desperate to capture the title.

“I wanted to win the championship every year that I’ve competed in the class as everyone does, but I’ve had a lot of bad luck and things didn’t really work out how I had planned,” he reflected. “This year’s my last in the Under 19s and I’m definitely aiming for the win. The team’s great and they’re there to win the Under 19s title, which so am I. I think it’s a great fit for me.”

Having the added bonus and a career path paved out for him at Yamaha if he can excel in each step is another positive for the likeable South Australian, and he’s aware of the opportunity both YMA and Bishop have given him in 2011.

“If I can do good this year then hopefully I can step up to the Pro Lites and Yamaha definitely has a lot of potential with its teams in both the Serco and CDR teams,” Arbon added. “They’re both good and for sure it’s something that I look toward in the future.”

Redhead is also on track for success and has the speed to rise through the ranks as well, although he wasn’t on hand during the test since he had to work as a landscaper for the day.

While the GYTR Rockstar Energy Yamaha team is factory-supported and has all the resources required to win at this level, the riders still aren’t yet paid as professionals, proving that final step before they become complete pros.

With the might of Yamaha behind them, Arbon and Redhead probably wouldn’t have it any other way. Make sure you keep an eye out for these boys in the Yamaha stable in the seasons to come.