MotoOnline.com.au has a special edition Moto Insider column for this week in a review of the MX Nationals opener.

Hello and welcome to a special edition of the Moto Insider column, marking our first standalone dirt bike column that we’ve submitted since moving our road content over to CycleOnline.com.au. It’s also a special edition because it’s an MX Nationals review edition, giving you guys the inside scoop on round one.

Australian Motocross
The first round of the 2011 Rockstar Energy Drink MX nationals, Australian Motocross Championship, has been run and won, but unfortunately as far as the premier Pro Open class goes, we’re not certain who will be the man to beat this year.

Qualifying was a dry affair contested under blue skies, but as soon as the Open class jumped out of the gates for the main event all hell broke loose when the rain came.

What we do know is that CDR Rockstar Energy Yamaha’s Josh Coppins is fast. Really fast. We also know that Billy Mackenzie has what it takes to post quick laps and win races in any condition. Coppins’ fellow Kiwi Cody Cooper’s pre-season and qualifying form looks like he’s raised his game too.

In fact, over the course of a single lap, all three of those internationals were over two seconds quicker than Cheyne Boyd, who was the first of the locals for the new-look Carlton Dry Honda Thor Racing team.

It was from fourth position through 12th where no less than eight riders were all ranked within two seconds of eachother, displaying just how close the 2011 season will be.

Guys like Boyd, Dean Ferris, Dan Reardon, Lawson Bopping and the Marmonts are all going to have to lift if we are to see the Open title remain on Aussie soild for the year ahead. 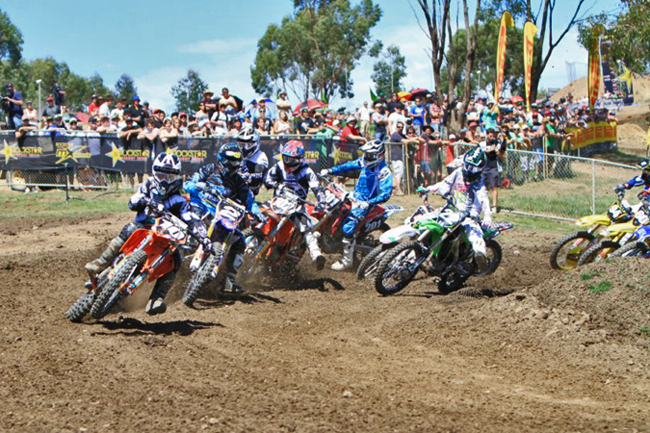 The Pro Lites and Under 19s were contested in the dry at Broadford in swirling heat, before a rain storm hit just in time for the Open class.

But that qualifying pace all meant nothing once the storm arrived, actually fitting perfect with the series’ ‘Oncoming Storm’ tagline that WEM have opted to run with this year.

The formats are controversial, tough and downright tiring for all – riders, team members and even suppliers of goggles, helmets, jerseys etc. They are here to stay and I have a feeling that whoever manages their strategy best will reap the rewards throughout the season.

While Mackenzie was the eventual winner and Cooper scored great points in second, the day didn’t go to plan for Yamaha teammates Coppins or Marmont. We’re hearing their YZ450Fs were super difficult to make the most of in the mud, plus a large boulder to Marmont’s eye didn’t do him any favours.

The funny thing is, the roost that Marmont was hit with was actually from younger brother Ryan’s factory KTM 350 SX-F… who said the 350cc didn’t have power!

In reality we’ll have to wait until Appin to see who has the format dialled in the dry, but you can be sure that the fires have been lit beneath Coppins, Jay Marmont and Reardon for that matter if they are to climb their way back in the series.

Luckily the Lites and Under 19s classes were contested in dry conditions before the Open proceedings kicked off. What we learnt from those classes is that starts are crucial. If you don’t get out of the gat in the top five then there’s very little chance of winning the race as everyone seems so evenly matched.

Matt Moss is obviously fast and looked at ease on his KTM already, however the performance of his JDR teammates did spark a few surprises with both Brenden Harrison and Josh Cachia reaching the podium.

It was an emotional event as many reflected on the life and career of Andrew McFarlane, one of the greats around Broadford, the circuit which ultimately claimed his life in 2010.

The JDR Motorsports team wore plain black polo shirts with Sharky’s logo on the during the weekend in memory of Andrew, which was a nice touch for a world class team.

On a separate note, the team has taken up a similar livery to what its U.S-based JDR/J-Star/KTM team has, and the semi wrap was only finished just days out from the event. It looks great, as does the freshly re-wrapped Carlton Dry Honda team truck.

CDR debuted its much anticipated semi on Saturday at Broadford, a proud moment in Crag Dack’s life as he reflected upon his early years when vans were the norm around 20 years ago when he was in his prime. The sport’s come a long way since then and Dack’s success is a great example of what can happen if you’re dedicated to it for the long run.

So what can we expect at Appin? It’s an all-new track as Sydney returns to the calendar, and you can bet that the locals will be fast. The thing is, none are really able to practice on the ‘Bellbird’ circuit that the nationals will be held on, but every Tuesday you can find a who’s who of the MX Nationals on the main track at the complex.

Serco Yoshimura Yamaha’s Jake Moss – twin brother of Matt – returned to riding on Monday as he continues to recover from a shoulder injury, and he’s pencilled in Appin as the round he wants to make his comeback at. I’m excited to see the brothers do battle in the Lites once and for all! 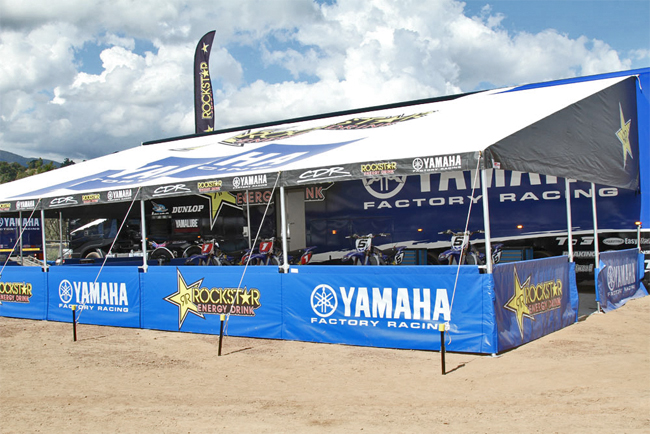 Yamaha has a fresh new semi at Broadford, which by the end of the weekend was agonisingly muddy due to the rain storm.

Speaking of Serco, it was interesting to see they have added Yoshimura as a title sponsor of the team for this year. I spoke to Gavin Eales on Monday and he said that Serco isn’t importing Yoshimura, however they do have sponsorship direct from the U.S. I have a feeling we need to watch that space…

Also on the subject of Yoshimura, both Cody Cooper and Dan McCoy had sweet double-barrel exhausts that we’d seen on Ryan Dungey and Brett Metcalfe’s Suzukis in the AMA earlier this year. They certainly are a topical point and look ultra cool, too.

Something else we noticed over the weekend was that Jay Marmont turned up at round one with a hydraulic clutch on his Yamaha, an item that he first tested during the week while in Melbourne with the CDR team. Teammate Coppins didn’t have one since he wasn’t able to test, but expect him to start using the system at Appin.

In case you missed any of our coverage from over the weekend, check out our two image galleries (Pit Pass and Track Access), four films (Pre-Show, Race Reflection, Post-Show and Raceday Extras), plus various news stories still viewable on the home page. We also had the Post Race interview with BillyMac yesterday.

Our Fantasy League has clicked another gear this year and we experienced a great amount of entries for Broadford, so we look forward to watching that build from here. The good news is that our custom Ringmaster Images MotoOnline.com.au plates have arrived this week, and each round winner will be receiving one to proudly display on their mantles at home.

That’s it for this week and, as always, thank you for stopping by to read about the sport one week at a time. We have some very exciting developments in store over the coming weeks, so make sure you stop by to see them as they take place.