Monster Energy Kawasaki’s Billy Mackenzie got his 2011 Rockstar Energy MX Nationals season off on a positive note with victory in the Pro Open class at Broadford last weekend.

Mackenzie mastered the wet and tricky conditions after rain feel heavily as the premier class commenced, using consistency to win the overall by a handy 18-point margin.

MotoOnline.com.au called the Scottish star this afternoon to get a quick rundown on the event in his eyes, as well as to get a gauge of what’s to come for the season ahead. Scotsman Billy Mackenzie was the big winner at round one of the MX Nationals last weekend in Victoria.

Last weekend at the MX Nationals opener we saw really muddy conditions, so is it a relief to get that first win out of the way considering the conditions?

I wouldn’t say it’s a relief because that’s what we’ve been working toward all summer – winning the first race. That’s been our goal and what we had planned. The conditions made it a bit difficult, but in our case it kind of worked out in our favour.

I kind of wished we had a dry round so we could judge everyone’s speed because there were a few people who had issues, but the new round will be completely new again. Everyone’s going to come out swinging and will know what they have to improve on and stuff. I just need to make sure that I’m doing the same things during the week and am prepared for it.

We’ve got a few new guys this year in Josh Coppins and Dan Reardon, so how did you find it in qualifying when it was dry? Did you feel like the pace was higher or were all things pretty much normal?

Well I put down a lap that I pushed pretty hard, I mean I got held up by a lapper in one section, but apart from that I got a pretty sweet lap. When I came in and saw Josh was ahead of me I was actually pretty surprised because I felt like the lap I did was good enough for pole.

It was pretty close though, and I kind of expected a few of the guys to be closer than they were. But, it’s just one lap and you can’t really tell much from that when it comes to the race.

We have the four motos back-to-back at all rounds, so what did you think of the format? It seems consistency could be the most important part of the package right now.

Yeah, with those races you just have to make sure you’re consistent and stay out of trouble. If you crash or have something go wrong in the first moto you can’t really regroup before the next ones.

You sort of have to be cautious, but still fast at the same time. I think everybody is still kind of working the format out, but a good start is important and staying out of trouble is important too. 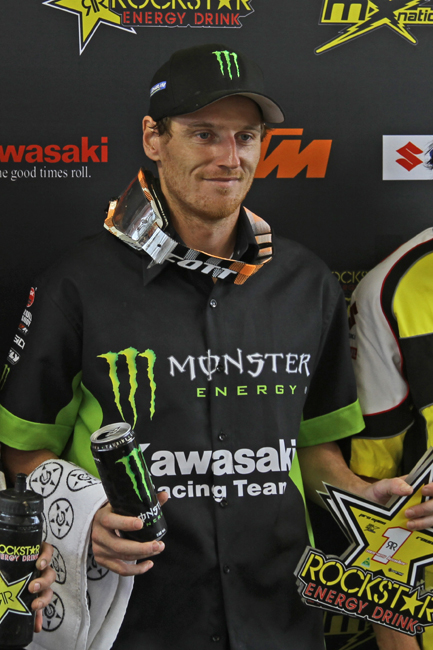 Mackenzie was happy to pull through the tricky conditions for a round one win on Sunday.

You’re in your second season with Troy Carroll’s Kawasaki team in Australia – now with Monster Energy onboard and a few other changes – but do you feel more at home in Australia compared to round one last year?

Yeah, we’ve made massive steps forward in my personal life and within the team. I’ve sort of settled down and have a house here now, moved to the city and kind of feel like I belong somewhere now. My day feels more organised than it was before when I was living in Toowoomba or when I was cruising around.

I’m definitely more focused this year and we’ve made huge steps, so I guess it’s shown with the weekend’s result. It was a horrible day and we had lots of obstacles with the weather and stuff, but we managed to pull through. The team worked great, I rode well and we managed to get a win. It’s all looking positive so far.

I think you have an 18-point lead in the series after Broadford, but what tracks would you say you’re looking forward to the most? What are your strong ones after last year?

Well, I guess you could say Coolum’s a good one for me and I like Toowoomba, but I haven’t really checked the calendar to be honest with you. I liked all the tracks last year really, so I can’t really say that any of them will be my strong ones. Definitely am looking forward to Coolum though.

Okay well cool mate, nice job and we definitely look forward to seeing a dry round at Appin!