MotoOnline.com.au reflects on the week in our sport in Moto Insider #9.

It’s an international affair that we are going to see this year and we are at MotoOnline.com.au are excited for the gates to drop as the most anticipated season in years gets underway.

This time of the year is a hectic one for teams and series organisers alike as everybody scrambles to put the finishing touches on their equipment, while riders are fine tuning their fitness at this point while working out any remaining kinks in bike set-up.

Of course, teams won’t really know where they stand at this point and they’ll all take a lot from round one when we find out who’s fast and who’s not once and for all. After that, it’s simply a case of doing their homework and moving forward from there.

Broadford’s season opener will mark an emotional time for the industry as well considering the death of the great Andrew McFarlane last season at the Victorian venue, but it’s also obvious that so many also still hold exceptional memories of Sharky in his World Motocross Grand Prix performances at Broadford.

I know that Williams Event Management has put a massive effort into the series behind the scenes for this year, so it’s time to get the party started and enjoy the season ahead.

MotoOnline.com.au will be on hand throughout the series bringing loads of images, films by Guy Streeter from the Out of Bounds Film Company, plus all the news you could hope for across the weekend.

If you haven’t noticed by now, this week we are doing a series of Inside Line interview films as a preview of sorts to the MX Nationals series. Already we’ve had Josh Coppins, Dan Reardon, Cody Mackie and Dean Ferris, then tomorrow we’ll have Dan McCoy and Billy Mackenzie. To round out the working week on Friday we’ll feature Jay Marmont and Phil Nicoletti.

Also, don’t forget we’re running an expanded Fantasy League (aka Tipping Competition) this season, so be sure to get your entries in by clicking this link. The Rockstar Energy MX Nationals will commence this weekend at Broadford, with Kiwi Cody Cooper one of the pre-season favourites.

The pair of 20-lap Superbike and Supersport races across the weekend were phenomenal, with the top teams and riders in the series going all out to take charge in 2011.

We know by now that Glenn Allerton was able to win the Superbikes for Procon Maxima BMW Racing while Christan Casella took his first ever round win for AARK Racing Triumph, making two non-Japanese brands atop the podium in the series’ premier class.

While no doubt the racing was superb, the real concern for the weekend was having just 12 riders on the Superbike grid, a sad state to see for what is supposed to be Australia’s premier road racing category no matter what angle you look at it from.

The question is, what do they do from here? Whispers of a switch to Superstock 1000 (or in ASBK terms, Prostock) specification bikes seems to be doubtful, but I have heard talk that a down-spec of sorts could be on the cards.

Parity is the main concern right now since BMW’s S 1000 RR is already winning with what the Hepburn Motorsports team are claiming is a standard engine, and we have no reason not to believe them that it is stock.

In my opinion, the series would regain strength and essentially maintain parity by running under Superstock regulations, albeit allowing suspension revisions that Superbikes are currently allowed, full system exhausts, Power Commanders and even quick-shift systems if they want to match the Beemer’s benchmark.

No doubt everybody will have their own opinion on this and that is part of the problem I can see with ASBK in its current state – nobody is taking control. Between Motorcycling Australia and International Entertainment Group, some serious discussions have to take place as soon as possible in order to save the series.

Could it be the travel schedule that’s holding people back? Maybe. But to me the number one concern is the specification of bikes. Sources say they’re not that much more expensive to build or campaign, but in my opinion it’s more the perception that they are difficult to build, develop and make the most of with limited resources.

We’ll keep you updated on anything we hear regarding the future and be sure to keep an eye on AMCN next week for the opinions of the people in charge direct from Tassie.

In the meantime, the FX-Superbike series starts this weekend at Eastern Creek with a healthy pack of grids and a pack of determined privateers willing to take on the factory might of Yamaha.

There may not be the factory participation or mega dollar teams that the ASBK boasts, but you can be guaranteed that good racing will be on the cards throughout the round. 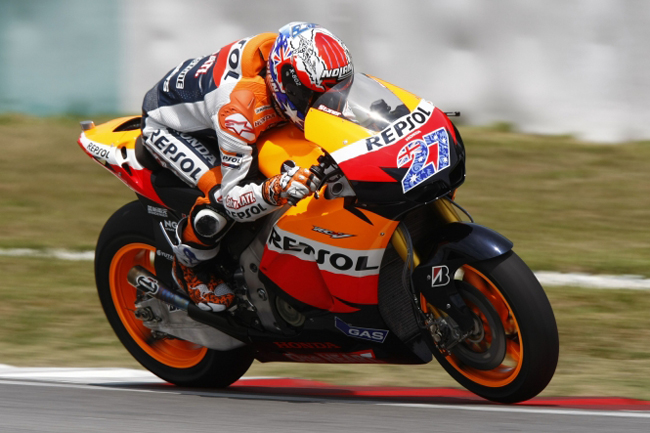 MotoGP
There’s no doubt that Honda’s official factory riders have dominated the 2011 pre-season and late last week it surfaced that HRC riders are making use of an all-new transmission system in MotoGP this season. That’s what reports from Europe are declaring, and if pre-season form is anything to go by, the new system could mark an evolution of sorts in motorcycle gearboxes.

It’s believed that HRC is using an innovative transmission system that enables riders to shift quicker, some insiders predicting that it’s saving them up to 0.9 seconds a lap at the 5.543km Malaysian circuit.

Honda Racing Corporation vice-president Shuhei Nakamoto confirmed following Sepang testing that HRC does have a system that allows for faster shifting, but that’s the only information officially in the press.

“Obviously HRC is not using anything illegal, but it’s true that we have something new on the transmission that currently allows for faster gear changes,” Nakamoto reportedly commented. “We are not talking about a DCT, but I can’t tell you how it works… because I don’t know!”

The FIM rulebook doesn’t allow for Dual Clutch Transmissions (which Honda uses on its production VFR1200) due to costs, however HRC has been linked with British company Zeroshift, which has been working closely with Xtrac – the company that provides gearboxes for the V8 Honda engines used in Indycar racing.

Veteran American journalist Dennis Noyes made the link to Xtrac in a recent column on SPEED’s website, that British company recently revealing a single clutch ‘Instantaneous Gearchange System’ (IGS) that operates in a similar fashion to a DCT system.

Featuring a ratchet and pawl mechanism between each gear hub and the main shaft, Xtrac’s IGS system enables simultaneous selection of two consecutive gear ratios, but with only one set of gears driving.

The system makes sense and, if the factory Honda GP riders are in fact incorporating it, it’s strikingly fast on track. HRC’s opponents on the back foot and it could take much of the season to develop similar transmissions if the budgets allow.

The thing is, if any of the manufacturers are going to respond to Honda’s alleged breakthrough in transmissions then they better get to work. Otherwise we could see an all-Honda podium right through to the middle stages of the season if it’s as good as the insiders are saying…

Anyhow, that’s all for this week. Thanks for reading!