Moto Insider looks back at the week in our sport from behind the scenes at the races.

Hello and welcome to another edition of Moto Insider, and by now regular visitors of MotoOnline.com.au will probably realise why we changed the name of this weekly rundown from the Racing Insider to Moto Insider.

Yep, that’s right, when CycleOnline.com.au launches – our new site that will feature all street bike news – we’ll form a similar column under the Cycle Insider banner. For now though, let’s look at the interesting things in the sport from the week just gone. 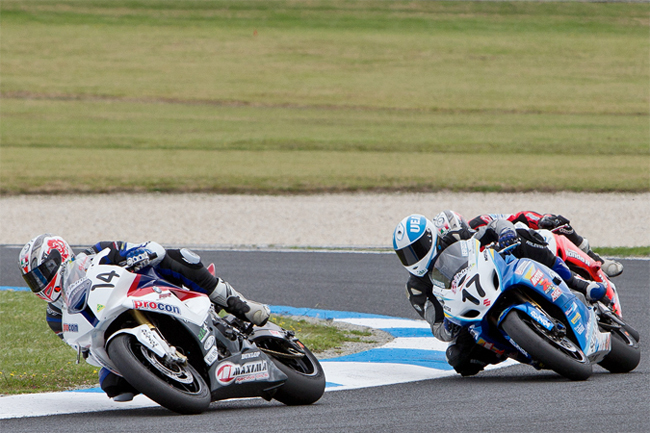 The ASBK field is stacked with talent, but grid numbers could be a concern right through 2011. Image: TBG Sport/Andrew Gosling.

I’ll admit it came as a surprise to me that he won on debut, and it came as an even bigger surprise to see the factory Team Honda Racing duo of Wayne Maxwell and Jamie Stauffer suffer mechanical meltdowns on race day after going 1-2 in Superpole.

The official word was that Maxwell’s radiator hose clamp broke, causing the smoke show he put on before being black flagged on Sunday in race two, while Stauffer’s CBR suffered an electrical problem that caused him to suddenly slow mid-race.

It would seem Stauffer and electrical issues are a common thing over the past 12 months after experiencing similar issues at Queensland last year, however they’re obviously unrelated since he’s switched from Ducati to Honda in the off-season.

Allerton’s tyre choice for the drying race one was genius as he opted for slicks while most were on wets, and Aprilia’s Ben Attard was another to benefit from a gamble that paid off by finishing second.

Team Suzuki’s lone factory rider for the weekend, reigning Supersport champ Troy Herfoss, put in a very credible performance to score second overall after qualifying on the front row alongside his very experience opponents. Believe me, he can win races this year and most likely will.

Whatever you do, don’t rule out the Honda runners just yet. The factory bikes look phenomenal and although they had some teething problems, the team is developing a number of new components this year and proved very quick all weekend long.

I’m also expecting to see 2003 champ Craig Coxhell find his feet at Demolition Plus GAS Honda Racing, and I’m confident that a little bit of confidence could go a long way for the Victorian. Just give him some race time.

This weekend’s second round is back to back in Tasmania at Symmons Plains, so most northern-based teams have stayed on down south and are already in Tassie. The momentum of having two rounds in a row could be a healthy change that the series needs.

Speaking of healthy, there are only 12 entries for the Superbikes this weekend – one less than last week’s opener at the Island if you don’t count the Prostock field.

This week though Prostock is running standalone, so we’re going to see a very thin field of Superbikes, albeit an extremely talented line-up featuring some of the best riders in the country.

One rider we won’t see is Beau Beaton, who has gone to Europe after landing a rider with the Garnier Alpha Racing BMW team on an S 1000 RR in the FIM Superstock 1000 Cup. He’ll join countryman Bryan Staring in that series, which will give added interest for us Aussies. We’ll do our best to follow him during the year.

Hopefully Kris McLaren is back after his scary spill at Turn 3 in race two last weekend, the young Victorian said to be keen to give it a shot again this weekend despite some hand injuries. Glad he got out of the incident relatively unscathed with no broken bones.

I’m going to call it right now and say that the ASBK will go to a more standardised rule set in 2012 – they have to if the series is to keep its credibility over the next few seasons.

It may not be the ideal option, but the bikes will look the same, sound the same and most likely run similar lap times if the tyres remain the same spec. Whether it’ll be any cheaper or not isn’t for me to say, however the participation levels will surely be boosted since stock bikes are far easier to build and more accessible for your average privateer.

Besides, didn’t Allerton just win last weekend with a standard engine in his BMW? That’s what they’re claiming and I certainly have no reason to doubt them. The future may already be here.

By the way, it’s positive to see Supersport receive a boost in entries for this year, the field featuring a great mix of experience in round one winner Aaron Gobert and Kevin Curtain, alongside youth in the Waters brothers, Rick Olson, Mitch Carr and co. That series will be one to watch as the year goes on.

World Superbike
Wow, what a weekend it was for Carlos Checa and Althea Ducati at Phillip Island’s season opener. We all know he did the double by now in dominant fashion, and you can guarantee that the Italians are secretly smiling in Bologna after pulling its factory effort for this year.

What of the Aussies? Josh Waters and Troy Corser did battle as best of the locals all weekend, an impressive feat for Josh on the very trick Yoshimura machine. You can tell just how important Yoshimura’s entry is for WSBK and I’m hearing he’s almost definitely riding more rounds with the team this year.

Corser was actually going quite well on Sunday bar a few costly mistakes, and you can guarantee that teammate Leon Haslam’s podium on debut has him fired up to bounce back at Donington.

Personally, I was hoping for more from Bryan Staring’s Pedercini Kawasaki, but do understand that it’s early days in the ZX-10R’s development. The fact that he was battling throughout the weekend with BMW Italia’s current Superstock 1000 FIM Cup Champion Ayton Badovini was a very big positive that Bryan can take out of the Island.

Mark Aitchison actually surprised me in his WSBK debut as Staring’s teammate, the full time Pedercini rider basically matching the current ASBK champion’s times and edging him out in race two despite a lack of track time at the Island on a Superbike. Hopefully his equipment allows for progress during the year.

In Supersport – the race that many were calling the race of the weekend – Broc Parkes had a fantastic start to the season for Motocard Kawasaki, while Mitch Pirotta’s luck ran dry as he burnt out a clutch after the start.

All in all it was a very entertaining weekend, one that could have been spoiled by Sunday morning’s rain, albeit eventually becoming a great day of racing to start the season.

If there’s another thing we can be assured of after last weekend, there will be a lot of healing and nursing injuries going on between now and Donington Park next month – none more so than Castrol Honda’s luckless Johnathan Rea. Get well soon, boys! Gosford's Mark Aitchison was impressive at Phillip Island in WSBK on debut for Pedercini Kawasaki.

MotoGP
Casey Stoner’s dominance of the most recent Sepang test bodes well for a big year ahead. In fact, it’s the best form we’ve seen him in since he won the title in 2007 and I’m sure that Australia will really get behind him this year.

It’s actually been an all-Honda affair at the top of the time sheets this year with Repsol’s Stoner, Dani Pedrosa and Andrea Dovizioso, plus Gresini’s Marco Simoncelli, all on the pace.

This year will almost certainly be the last of the 800cc era, and when you consider that HRC is yet to win a title with the RC212V, there’s no wonder that they’re putting in such a huge commitment.

Ducati’s Valentino Rossi is becoming increasingly frustrated with the Desmosedici – especially after he missed a day through illness – and his teammate Nicky Hayden also seems to be suffering a lack of form with the new bike. Something needs to be sorted quickly for the Italian team, otherwise it could be a very embarrassing season if former rider Stoner storms away at the front.

Yamaha’s world champion Jorge Lorenzo says he needs power, power and more power. The M1 was widely recognized as the benchmark just a few short months ago, but Honda has put everybody on their back foot so far.

And Suzuki? You can’t expect too much since Alvaro Bautista is their lone wolf, but their press releases have seemed positive of late so maybe the focus on the Spaniard could be the turning point they’ve been looking for.

We’ll see in a month’s time when the series commences!

Australian Motocross
Summer may be over, but things are only just heating up when it comes to the 2011 Rockstar Energy MX Nationals series. With just over a week to go before round one, we’re seeing the excitement levels rise by the day.

Last Thursday saw the series officially launched at Appin, marking the first real chance we’ve had to check out many of the new riders, rides and teams of this season.

To check out our complete coverage, see our report by clicking here, a huge image gallery here, or a cool film put together by our partners at Out Of Bounds Film Company here.

By the way, that film is just the first of many and next week we’ll have a film each day in the lead-up to next Sunday’s first hit out at the Broadford complex in Victoria.

Don’t ask me to predict who will win, because in all honesty, so many of the riders on hand at the launch looked as though they have stepped it up a notch for this year.

If you want to show us who you think will win, cast your vote in the Moto Poll that’s located in the right-hand side column throughout MotoOnline.

Chris Hollis leads the Outright series after returning from Europe and joining Yamaha, while KTM’s Toby Price debuted a 350 EXC – which was a surprise to many on Saturday morning when the team unveiled it!

One cool factor that came out of the weekend was that Hollis’ teammate Stefan Merriman actually won Outright on Saturday in the Cross Country race riding a 250F in the E1 class.

Also interesting was the fact that despite teammate Ben Grabham winning the E3 title last year on the four-stroke 530 EXC, KTM’s Jarrod Bewley is riding a 300 two-stroke in this year’s series and won on debut. Geoff Braico also debuted Husaberg’s new TE, finishing third in the E3s.

Can’t wait to see more of the new-look AORC, but for now, today’s column is done. Thanks for stopping by… 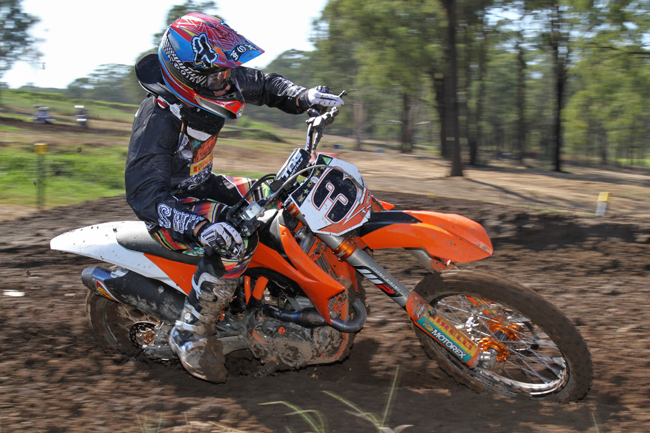