As the latest Australian dirt bike export to try his hand at racing in the AMA, at 18 years of age Tye Simmonds has got a steep learning curve ahead of him for the 2011 season.

Simmonds has packed his bags to take on the world with the Aussie-owned JDR/J-Star/KTM team, signed as the team’s lone fulltime 450 class rider aboard KTM’s all-new 350 SX-F.

Despite qualifying for just two of the five rounds contested to date, Simmonds is etching an impressive name for himself on the circuit as he builds experience in a bid to excel in the future.

MotoOnline.com.au tracked the boy from Bourke down following his 18th placing in the Anaheim 2 main event to see just how he’s settling in to life in the U.S. after his first full month based in the California. 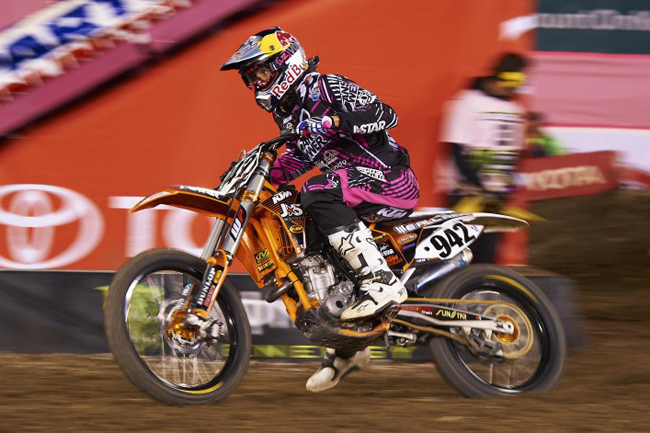 Australia's Tye Simmonds has consistently been improving in his rookie AMA season for JDR/J-Star/KTM.

We’re five rounds into your AMA Supercross career, which is a huge step for an 18-year-old Aussie kid, but how are you enjoying it so far?

I’m loving it mate, you know it’s so good to finally be over here and, like they say, living the dream. In saying that I’m annoyed I haven’t been able to qualify every weekend and that’s been a pain in the butt.

I qualified for the main in LA and again this weekend at Anaheim 2, but I was mad because I got in there and didn’t do anything. I got a horrible start and kind of made a few mistakes towards the end so I wasn’t really happy with it.

We’ll work on it during the week though and try make things better for the upcoming rounds.

You’ve qualified for two out of five rounds so far, so what is the difference between qualifying and not qualifying when it comes to racing 450 Supercross in the U.S.?

Well I’ve said it a few times, but I probably could have picked a better year to come over as a rookie [laughs]. But you know, in saying that it’s awesome to be around fast guys day in and day out.

Making the main feels like the world’s off your shoulders, otherwise you’re really frustrated when you don’t make it. But you get to watch from the ’stands if you don’t qualify, so either way you’re learning something.

There’s nothing like racing the main event and learning that way, so that’s the way I want to keep it. We’ll have to see how we go from here.

It’s not really a traditional step to go straight to the 450 class in Supercross at your age, but how much do you think this experience will help you a few years from now?

It should help me a lot, and if I went to the Lites then I’d be on that for two years or whatever, then I’d have to step up to the Open class. But I want to be there right now, not wait for a couple of years down the track. It’s good because I can learn, get my first year out of the road and then excel in my second or third year.

I would have loved to race a Lites bike, but I’m just way too heavy. I couldn’t do it in Australia, so there’s no way in the world I could do it here. I’m loving being in with the big boys though, that’s for sure.

What’s it like when you see guys like James Stewart, Ryan Dungey, Ryan Villopoto or even Chad Reed out on the race track? These guys are the biggest names in the sport…

Well the only time I’ve recognised James Stewart on the track was in LA when I was running seventh in my heat. Coming into the whoops I came into the berm and then hit the whoops before Bubba came past me like I was standing still. That kind of blew me away and I actually had a smile on my face, which was pretty cool.

You’re always learning something, even if it’s small things, just by watching those guys cut laps in practice. Watching Bubba go out and circulating for a few laps before he sets a fast lap is good and I’m really looking forward to the years ahead. 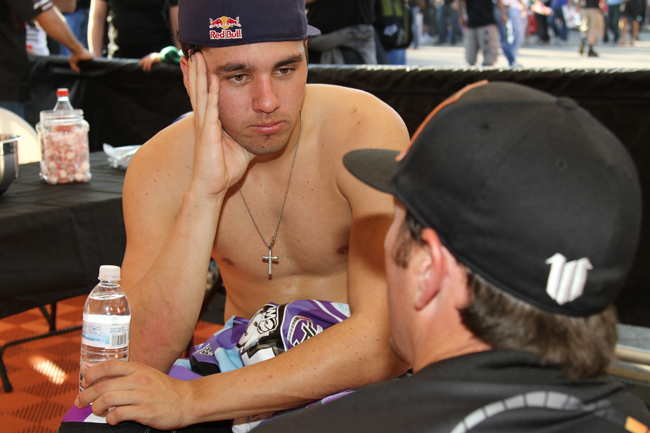 Simmonds has great respect for JDR team manager Nate Ramsey, the pair working closely to accelerate his learning in 2011.

You’re with the JDR Motorsports team here, the same team you raced for in Australia although you have Nathan Ramsey as your team manager here. How much does that take the pressure off you, being surrounded by familiar people?

It does, big time. You know, I got along with Nate from day one really good and I cannot thank him enough for making it the easiest it can be to come over and live my dream. It’s the same with Jay, Craig and the whole team – just everyone has made it so easy for me.

I came over and spent four or five weeks without my dad here, who has been there for everything in my career, and I was really frustrated but I got through it.

With my riding I haven’t put much pressure on myself, but after sitting in the ’stands at round one after not qualifying I felt like I let the team down a lot. That kind of upset me, but I’m pumped to be starting to make the mains and I want to get better results for those guys.

Like I said, I can’t thank JDR enough for giving me the opportunity.

Aussies back home obviously follow you via results and race reports from each round, but what’s life like for Tye Simmonds in America away from the racing? What have you been up to between races?

It’s definitely an eye opener, but I mean, you have seen what we get up to over the last few days Gobert – just playing Playstation, do a couple of things to definitely try and keep things fun in between racing.

There’s definitely a serious side to it all though and we go riding at the test track, I’ve been training with Randy Lawrence as well, so that’s been really good for me too.

I definitely miss home a lot and my friends, plus my family there, but I’m working to reach my dreams so I just need to keep building my momentum and get more and more comfortable living over here. It’s definitely a cool thing to do!

Okay mate, well we’re definitely all behind you and look forward to watching you progress as your experience builds. We’ll catch up again soon.

Yeah, thanks Gobert I appreciate it a lot.