The gates have dropped on the 2011 season and MotoOnline.com.au is right there for the ride...

Happy new year guys and welcome to our first Racing Insider column of the 2011 season. What better time to get the ball rolling than just days following the AMA Supercross season opener in the U.S. – the first of the big series the get underway this year. American Supercross
The Anaheim 1 season opener is always a huge event to kick the season off, and last weekend may have been the biggest build up to round one in history as Australia’s own Chad Reed took on Ryan Dungey, James Stewart and eventual winner Ryan Villopoto.

You have to hand it to Villopoto for coming back from last year’s devastating leg injuries, and what a way to kick of Monster Energy Kawasaki’s partnership with FMF exhausts – the company taking over from Pro Circuit as Kawi’s supplier.

Dungey was also his usual consistent self, managing to hold out a slow-starting Stewart to the finish, while Reed wound up fifth behind rookie Honda rider Trey Canard.

Reed’s debut didn’t go exactly to plan, but when I spoke to him on Monday he was genuinely content with his performance on debut with his all-new TwoTwo Motorsports team after getting a shocking start in the main.

Of the other Aussies, Brett Metcalfe rode well in his 450 Class debut for Rockstar Makita Suzuki to take eighth after a mishap mid-race, while Tye Simmonds came super close to qualifying for the Aussie-owned JDR/J-Star/KTM team but just fell short.

Local fans were right behind Simmonds’ guest teammate Ryan Marmont as he raced to a solid 14th in the Lites after transferring directly from his heat, and he’s scheduled to do one more round before returning home to focus on the MX Nationals.

Two Aussies who missed the race due to injury were Michael Byrne and Dan Reardon, the pair unfortunately ruled out in the lead-up to A1. It’s expected Reardon will return this weekend while Byrne will be back next month all going well.

Speaking of Aussies, Jake Moss was set to replace Jake Weimer at Monster Energy Kawasaki for rounds two through five, however he was injured in a crash while racing in Germany last weekend – a huge blow in what could have been a superb opportunity.

From this point on its all systems go for the season, and something tells me that the perfect storm that was supposed to eventuate at Anaheim is approaching very quickly! 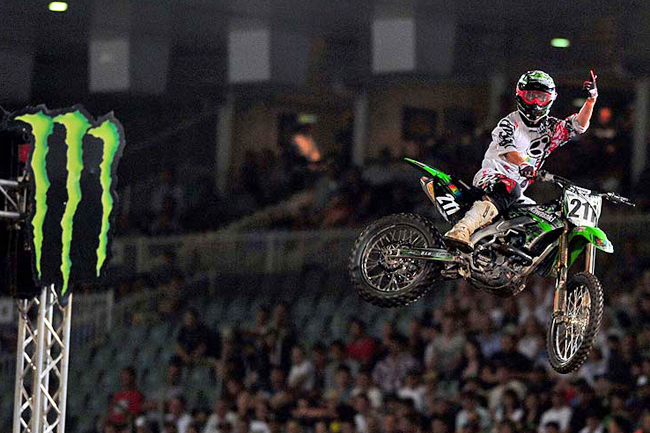 The Kawasaki Racing Team of Billy Mackenzie (pcitured) and Dean Ferris has picked up Monster Energy as its title sponsor for 2011. Image: Sport The Library.

Dan McCoy will revert to the Lites class as he’s landed a dream ride with Rockstar Motul Suzuki, taking over from KTM-bound Matt Moss.

In turn, McCoy’s seat over at Coastal KTM has been taken over by racer/FMX star Robbie Marshall.

Also confirmed this week was the future of Cody Mackie, who has signed for the AXIS Motorsports Honda team. Personally, I think that may just be the ride that Mackie needs to reach his full potential this year.

Speaking of Matt Moss, the word is that he had the option of heading over to the U.S. with his Aussie-based JDR teammates Marmont and Reardon, but opted to stay in Australia in order to heal the wrist that plagued him through much of last year.

We still haven’t had confirmation yet, but all indications we are receiving still point toward twin brother Jake riding for Serco in the Lites class of the MX Nationals before heading over to the Open class with CDR Rockstar Yamaha for Supercross.

Can you imagine the racing in the Lites if the Moss brothers go head-to-head on 250Fs outdoors? Wow.

Current Open class number three Dean Ferris will ride a 450 outdoors before reverting to the Lites for Supercross when he makes his debut for Monster Energy Kawasaki this year.

Yes, you read correctly – the factory team managed by Troy Carroll has picked up title sponsorship from Monster for 2011. It seems the team’s achievements by winning Super X with Josh Hansen last year didn’t go unnoticed, which is a major positive for the sport.

We gave TC a call yesterday afternoon to see how the Toowoomba-based team is travelling considering the devastating floods in the area, and he said all was okay for now in his area. Fingers crossed it stays that way as the team puts its finishing touches on a new base for this year.

Just quickly, take a look at your calendars – there’s less than eight weeks to go before the MX Nationals season kicks off at Broadford on 6 March! We’ll be there and cannot wait. 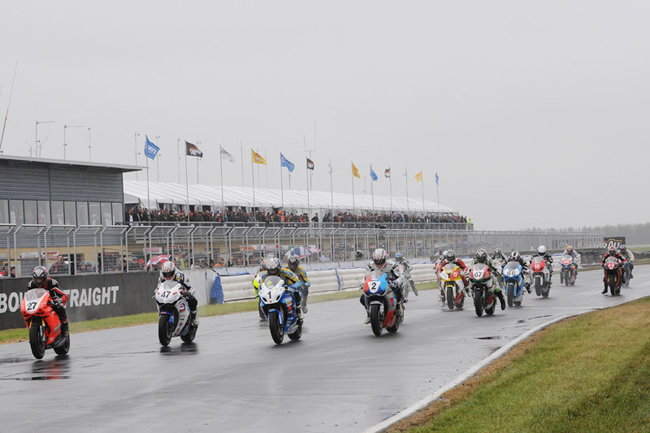 Prize money has increased for ASBK 2011, while entry fees have been lowered. Image: Keith Muir.

Plus there are details of contingencies and travel subsidies that headline the 2011 ASBK series. The documents detail the distribution of over $120,000 in prize money and contingencies, plus over $100,000 in subsidies to support riders and teams travelling to events.

In 2011, the class previously known as Superstock 1000 will be re-branded as Prostock. The class will compete on its own at four standalone rounds (2, 3, 5 and 8), while at World Superbike and V8 Supercar rounds, Prostock will race alongside Superbike, with competitors racing for the Prostock Challenge prize money.

Check out the full version of the Supp Regs by clicking this link.

Also, the Perth round of the series has been shuffled forward a week due to a date change in the V8 Supercars calendar.

The news that Yamaha will return fulltime to the Supersport ranks in the ASBK with Rick Olson and Kevin Curtain is fantastic for the sport, as is the news that current FX600 champion Olson will step up to the FX1000 class in Formula Xtreme alongside Curtain and Pat Medcalf this year.

Australian road racing just received a massive boost thanks to Yamaha – plus Honda’s official factory return to the ASBK that was revealed in December – and now we’re waiting to see what Suzuki is officially going to do.

That’s all for this week, thank you for tuning in and we look forward to a mega year ahead!