MotoOnline.com.au gets the scoop on Anaheim 1 from Australia’s own Chad Reed.

The round marked Reed’s debut as team owner/rider under the TwoTwo Motorsports banner, which he launched just two months prior to the season opener.

A solid fifth place finish despite finishing the opening lap in 13th was the end result for the Aussie, giving he and the team a strong platform to work from for the remainder of 2011.

MotoOnline.com.au gave our greatest ever dirt bike export a call this afternoon to get the rundown on how he thought the weekend went for ‘Team TwoTwo’. Right on, nice one. So, the big event of Anaheim 1 has been run and won. I could tell by your Tweets that you were super proud and excited to debut your brand new TwoTwo Motorsports team. You’ve come a long way from the Junior days back in Australia…

Yeah, real proud and excited for the weekend. Honestly, I was just in a position where I needed to go racing because there’s only so much riding that you can do by yourself. You get to a point where you’re happy and comfortable, so after that you need to go racing to see where the next step is.

It’s just running through that whole procedure of being at the race, putting the tent up with all the guys – all new guys, some of them which I have worked with before – and just figuring each other out.

I think we had a very smooth weekend and a good result. We were quick in practice and qualifying, then struggled a little in the heat and the main, but overall I think top five is a great start for us.

You finished fifth in the main event after being way back in the pack on the opening lap. It’s a positive start, even if it wasn’t quite the fairytale start for you.

I mean, there’s always the fairytale story where you want to come out and win on debut or whatever, but I think championships are it. I feel confident in where we’re at and the chances that we have to move forward are positive.

We’re just putting a plan together for this week, do some testing and change a few things here and there. It’s all just to make things a little easier on the weekend and make it all a little more comfortable.

Overall the weekend went, I wouldn’t say exactly to plan because the goal is to try win or be on the podium, but top five is the best that we could manage and that’s good enough for me.

We have seen how comfortable you look on the Honda and you’ve told me before that the bike really suits you, so was it everything you hoped for once you were in a race situation with the likes of Stewart, Dungey, Villopoto and co.?

Yeah, it was good I think. Overall there are a few little things that I need to work on but that’s very typical of this time of the year. I can promise you that there’s not a rider in the top five or 10 that are not going to take what they learned this weekend to improve on their set-ups.

Like I said earlier, I was comfortable and ready to go racing – we needed to go racing to see what the next step was. I feel like we have a good game plan and we can go and work on our weaknesses, so I think we’ll be a little stronger.

Obviously starts are important every year, but this year we’ve got a solid group of young kids in there who are strong from the beginning, so you definitely can’t put yourself in vulnerable positions like I did this weekend.

Pretty much off the start I think James [Stewart] was two ahead of me on the first lap and he finished two ahead at the end, so I just have to be stronger off the gate and stronger in the first half then I think we’ll be right in it.

It was the first time in a very long time that you haven’t raced a factory bike in AMA Supercross. Do you feel as though that is a disadvantage in this day and age, or it’s all good?

I honestly don’t look at is as a factory bike or a privateer bike. It’s all about who you’ve got working on your bike and who’s calling the shots. I feel like we have a great bike and I don’t think that my fifth place reflects on my bike not being a factory bike. I have a good plan and a good starting point. There are things on my bike that are the same as what I’ve had in the past so I’m not far off.

The biggest advantage of being on a factory team is having all those resources around you, and the endless parts in the truck and race shop that have been accumulated. We don’t have that, so that’s really our weakest link – everything has to be started from the ground up.

We’re working with a new motorcycle for us and have no previous model or year to fall back on, so I’m sure every weekend we’ll learn something and will try to be purposeful on the changes that we make. 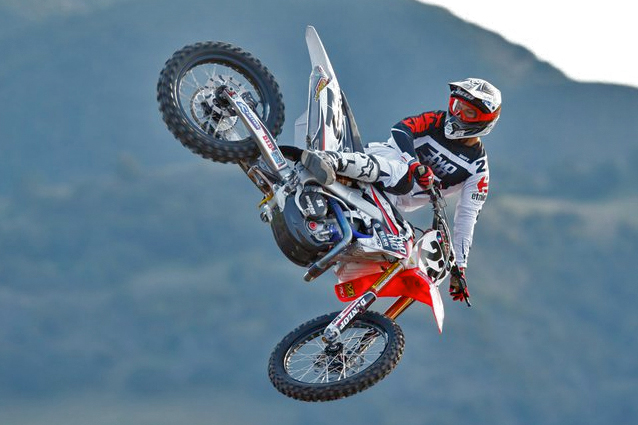 Heading into Phoenix this coming weekend, Reed says he'll return to the test track to make some refinements this week.

How different was it for you to enter A1 as your own boss? I guess you don’t really have anybody to answer to except for the people who are putting in hard work, as well as your sponsors, but at the end of the day you’re the boss now!

[Laughs] yeah, it’s nice actually. I’m having a lot of fun with it, it’s exciting, it’s fun and it’s challenging. At the end of the day, I don’t get called up into the office because I’m the one calling everybody else in to make the next plan for the week.

That’s fun for me because I get to call the shots, make plans and communicate with those guys to get their feelings on what they saw and what needs to be better so we can move forward.

It’s the same, but different. Everybody does it, so I guess all that’s changed is I’m saying “hey guys, let’s talk about this”, rather than being told to be in a room to see what happened, kind of thing [laughs].

There’s a long way to go in the series, a lot of races to be won. What’s the next step for you at this point after reflecting on A1?

At this point we’re making a plan, moving forward and are looking forward to the week. We’re ready to go, ready to get after it! Starts are obviously priority number one, which all comes down to me and my technique.

Getting my technique consistent is what I need to do. My heat race start was great, I watched it on film over and over again and my technique and my form was awesome. I actually could have been a lot more aggressive and probably could have got the holeshot.

I felt like I was really calm at the first one for some reason and I guess last year played a big role in that. I was in the middle of the pack and ended up not finishing the race because I came together with another rider.

This year I didn’t want to jeopardise a good top five finish, so overall we have a good base to work from now. We’ll do some starts, work on the suspension a little bit here and there and I think we’ll be solid this weekend in Phoenix.

Just finally, there was a lot of uncertainty heading into this year’s season opener for a variety of obvious reasons. Looking back now, were you able to get a good gauge on your main rivals?

You know, personally I would say that I think the pace was low on the weekend – I wouldn’t say that the pace was high. The track was challenging in ways that it really hadn’t been before.

Normally Anaheim is hard-pack and slick, that’s what we expect from it, but this year it had a lot of rain on it and the dirt was pretty moist. Throughout the night program it seemed like the moisture was coming up and it kind of got greasy on the main line, but off of the main line it was really loose.

I think a lot of people were struggling with that, and I know that I was struggling on the track in some sections. Kind of what I felt and what I could see in other riders on video looked consistent to what I was feeling.

Overall I felt the pace was low this weekend, and that for the big storm that everybody’s talking about I thought it was a pretty damn boring race. I know I was a distant fifth and that’s not the plan or the goal to be there, but I just felt like the race was a little bit of a let down with no battles at all.

We’ll all regroup and come out firing for Phoenix and the future races. I don’t think Anaheim 1 is a reflection on how the season’s going to be – it’s going to intensify a lot and will be pretty crazy here in the coming weeks.

Cool mate, well good luck this weekend and Australia is definitely behind you guys in the TwoTwo Motorsports team.

Thanks, man. I appreciate it and we’ll definitely be trying our best. TwoTwo Motorsports and Reed have enjoyed much of the media spotlight since launching the team in November.