MotoOnline.com.au has a new fresh look to it right in time for season 2011 - Gobert explains the latest evolution. 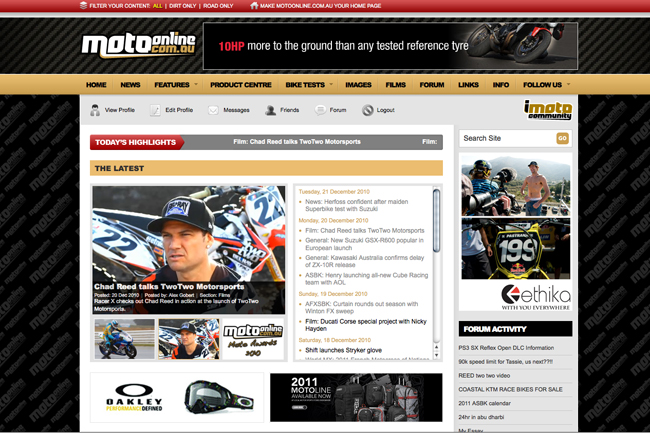 MotoOnline.com.au has a new look to it in time for the 2011 season.

It’s been less than six months since MotoOnline.com.au’s most recent makeover, however many of our loyal visitors would have noticed upon logging in late this afternoon that we have redesigned the homepage yet again.

This time it’s more of an evolution rather than a revolution – hey, I think I’ve heard that saying at many bike launches over the last few years! – however we believe it’s our best yet.

So, what have we done exactly, you are probably asking yourselves? The answer is, not a whole lot, apart from refining the way you navigate the site to make it easier for all.

Here they are, plain and simple:

In summary, what all these changes does is allow us to easily bring you the most up to date genuine news and feature articles in the game when it comes to Australian motorcycling online.

Our feature stories might be on hold until the new year and our news may be slowing as the season winds down, however rest assured we are still hard at it behind the scenes in our planning process and that MotoOnline.com.au will be back more prepared and better than ever for 2011.

Thank you for all the support to our readers and advertisers who have helped so much this year – we simply couldn’t exist without each and every one of you.

Santa may have came early for our regulars with these latest revisions to MotoOnline, but for now though, Merry Christmas to all and have a happy and safe new years!