Update: Just hours after this interview was published with Larsen direct from the U.S, MA announced that the championship is again yet to be decided. Click here for the news.

When PJ Larsen turned up on Australian soil for last year’s Brisbane Super X finale in a guest ride for JDR Motorsports, chances are that not many local fans would have even heard of the American youngster.

Now, 12 months later, Larsen has spent a full season in Australia with the JDR Motorex KTM team in the Lites category, pocketing the MX Nationals and Super X titles respectively.

While his dominance of the Nationals was easy to see, the Super X series was a much tighter battle for Larsen against dual defending champion Matt Moss.

This morning it was finally revealed that Larsen has been awarded the championship following a controversial scoring error from Motorcycling Australia, making for the perfect season for Larsen.

MotoOnline.com.au gave the 20-year-old a call at his home in Southern California to get his thoughts on the championship, as well as to reflect on his dream season in Australia. 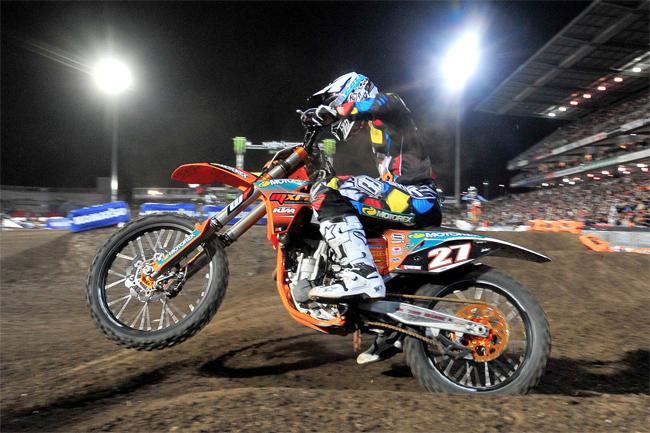 American PJ Larsen has been declared the 2010 Super X, Australasian Supercross Champion, in the Lites class. Image: Sport The Library.

PJ, you’re back in the U.S. now but it’s been confirmed today that you’re the Australasian Sueprcross Champion in the Lites class. You must be stoked to take a second number one plate of the year?

Yeah, I’m pretty happy with the end result and everything, but I mean it was kind of a waiting game after MA knew of the issue on the Saturday night of the race. We spoke with them on Sunday to see where it was at in the process and they said that I would win the championship.

Then Suzuki made an official protest over it, so then they had to reevaluate everything and go through it all. They took their time on the decision, but now a week later I’m seeing press releases that I’m the champion, so yeah, I’m pretty happy with that.

It must be a strange feeling for you being back home in the States when you’re officially awarded the championship. Is it satisfaction that you’re feeling, or are you just happy for it all to be over?

I’m definitely satisfied to now have the championship and obviously to also have the MX Nationals Championship. To go over there and have such a successful year, I’ve really had to go and leave everything that I’ve known for 20 years. I had to get used to a new place with new people, as well as a new lifestyle. I had to kind of readjust to life.

But I’m really happy with the way that the year has turned out and the accomplishments that I’ve had. It’s definitely something I’ll look back on and miss after meeting so many great people and having the laid back atmosphere of Australia. I’m happy to be back home in Southern California, but I’ll be back in Australia sometime whether it’s for racing or vacation. It would be good to go back and see all the friends that I’ve made.

You basically said from the start that coming to Australia was a stepping stone in your career, so when you did sign for the JDR Motorsports team did you expect to win both the Motocross and Supercross titles?

Well whenever JDR Motorsports and KTM decided to take me to Australia, that was definitely our goal to come away with championships. We knew it would be hard because, like I said, it’s hard to leave everything that you’ve know your whole life and move to a foreign country.

It’s not like I took my dad or a girlfriend, or anything like that. I packed my bags, went on my own and had people come and visit me every now an then. It’s not like they were staying for weeks at a time though. That was really tough, but my goal was always to be up front and fighting for race wins.

I really didn’t know where I stood heading into the MX Nationals and I had no idea of the Australian background. I watched the Super X series last year since my buddy Kyle Cunningham was in it, and that kind of got me into it. I realised the racing in Australia was growing and had really good potential, so that got me interested for sure.

I had to work really hard to win and I’m glad that I got to go over and be a part of the 2010 series in Australia. There were a lot of great races that standout in my mind, plus the really, really, really low point with the passing of my teammate Andrew McFarlane. It’s a thing that I will look back on and I’ll always remember the opportunity that JDR gave me. 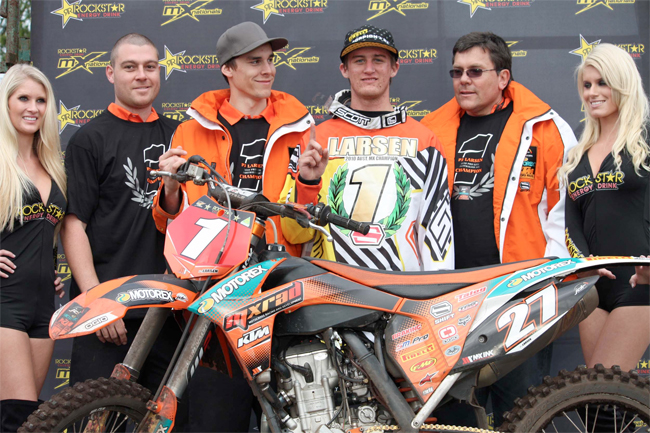 Now that you’re part of JDR Motorsports’ all-new American team, I guess now you can share your knowledge of your home country and help them evolve as well?

Yeah, for sure. Although I haven’t been around the professional side of the sport for very long as I was only in it one year before I went to Australia. I’ve got the basic knowledge of the U.S. way of doing things because obviously there Australian way is slightly different.

When you come to the U.S. you have to do it the U.S. way, but obviously having Nathan Ramsey as team manager will be a great help. We have a lot of people from great backgrounds who can help the team be successful. Everybody over here knows what needs to be done and can all do it right.

Seeing the way that the whole race shop has progressed since October when I went over to race Super X has been incredible – it’s leaps and bounds ahead of where it was. They’ve completely redone it and I’m really impressed with the work that everybody has been putting in. I know that we are going to have a successful year.

Finally, you’re obviously extremely confident right now heading into the East Coast Lites Supercross and then the AMA Motocross Championship in the 250 Class. Are you a dark horse for podiums and possibly race wins?

Well I’m honestly not the kind of guy who sets myself goals using numbers. Pretty much every time I go onto the race track I set the goal of doing the best that I can and at the end of the day if I go out and get first place then that’s awesome.

If I go out and finish fifth place, well as long as I tried my hardest, well I have to take it in my stride that I was as good as fifth place. I’ll go back and reevaluate my program and work on it for the next week.

As long as I go out and put the time in during the week training and testing before I show up to the races, I’ll be happy with whatever the outcome is. Things obviously can’t go your way every weekend, but if you try hard and push for it then good things will happen. We’ll just see how the year turns out!