MotoOnline.com.au recaps the week in motorcycle sport from behind the scenes in the Racing Insider. 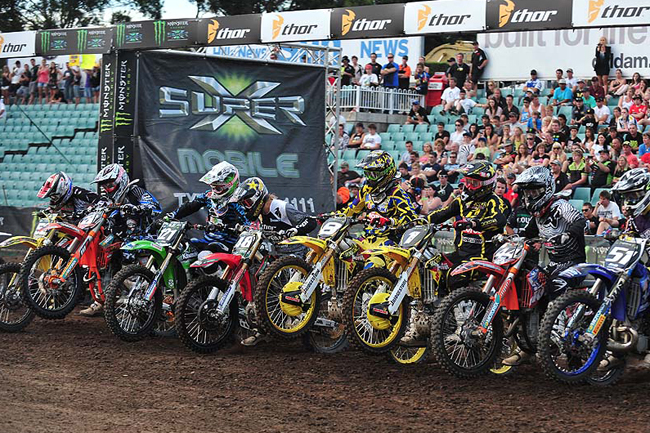 The Super X Lites will be the class to watch this weekend in Brisbane when the gates drop. Image: Sport The Library.

Australian Supercross
Hello and welcome to a relatively short edition of the Insider this week, with the big news being the up and coming Brisbane Super X finale this weekend in Queensland.

While Josh Hansen has one hand firmly placed on the Open class title barring any incidents, the battle for the Lites crown is well and truly alive and it’s just about to reach boiling point.

Title challengers Matt Moss and PJ Larsen had an altercation during qualifying Sydney and it was all pretty low key at the time, however with this week’s release of the U.S. Dirt Shark film – the American boys over here with Monster Energy – things just got a whole heap more interesting.

Larsen called Moss an “idiot” on film before Moss said he didn’t know what PJ was “crying about”, creating the first real rivalry that we’ve seen this season. No doubt the boys will both see the film this week and both will be fired up for Saturday with five points separating them.

To see the sweet Dirt Shark film for yourself, check out this link.

It was actually a great moment to see Jake Moss back up on the top step of the podium in Sydney, because he works so hard, puts a lot of heart into the sport and continuously bounces back from serious injuries. Let’s hope this is the start of big things to come for Jake.

Right now Jake doesn’t have a contract signed and there had been speculation that he was on a shortlist to join Chad Reed over at TwoTwo Motorsports in the States, but according to Jake last weekend he said he’ll likely be back in Australia full time again next year. Judging by his form in the AMA Nationals on a 450 last year, Jake may just be a darkhorse for the MX Nationals in 2011!

Scottish star Billy Mackenzie was phenomenal in Sydney, surprising the entire industry with his form and tying for the win before being bumped to second on a count back. BillyMac would have since watched the race on TV and he’ll be back an improved this weekend.

Wondering why the track at Sydney was pretty tame for a Supercross event? The word is that they didn’t get the amount of dirt delivered that was expected and there wasn’t anymore available at short notice. It was really one-lined and hard to pass for all.

Before we switch topics, one of the worst kept secrets in the pits was confirmed last weekend with Cheyne Boyd signed and sealed to be joining Todd Waters at Honda for next year. As for a Lites rider, there won’t be one in the MX Nationals at this stage, although we may see an American or too join the team for Supercross.

World Superbike
Australian Superbike Champion Bryan Staring will head over to Europe on Sunday for his first real test with the Pedercini Kawasaki team aboard the all-new ZX-10R Superstock machine.

Staring will test at Valelunga in Spain for a single day in what will be cold conditions, before he heads to Italy to try and sort his living arrangements for next year and then returns home for Christmas.

There has been testing going on in both Australia at Phillip Island and also in Europe this week, much of it under the radar, but keep an eye on out news section for updates as the days pass by.

Australian Superbike
I was lucky enough to head down to Phillip Island to test the championship-winning bikes of Bryan Staring and Troy Herfoss on Monday at a Phillip Island Ride Day, taking on one of the perks of being a moto journo.

It’s a role that I definitely look forward to every year after watching the boys race all year long, and once again the bikes certainly were a lot more capable than me on the day. Read about it in the AMCN Yearbook that hits the newsagent shelves next Wednesday.

This weekend’s 6 Hour at Phillip Island will be a memorable event, crowning the last of the Australian road race champions for the season as Endurance specialists.

Many big names are lined up and unless you’ve been hiding under a rock of late, chances are you’ll know who’s going and what teams are entered.

From what I hear, there’s a few rivalries building up already as the 11th hour entry of Team Honda Racing entry of Jamie Stauffer and Glenn Allerton looks to outshine the Demolition Plus GAS Honda Racing ‘dream team’ of Josh Brookes and Wayne Maxwell.

Over at Suzuki there are also a number of strong teams including the Team Suzuki factory entry of Josh Waters and Shawn Giles, while Scott Charlton and Cameron Donald will also be interesting to watch on the Racers Edge Performance GSX-R.

The big question in my mind is will Giles be retiring after this event? He hasn’t given any indication whatsoever that he will be, and according to Suzuki they aren’t even certain. What I do know is, if Giles decides to return in 2011, Suzuki will likely have three full on factory Superbikes next year with Waters, Herfoss and Giles at the helm.

Don’t forget Troy Herfoss and Brodie Waters on the Team Suzuki GSX-R600 or Christan Casella and Jed Metcher on the AARK Racing Peter Stevens Motorcycles Triumph Daytona 675. Hey, if it rains maybe the Triumph team should draft in Des Darby and they could provide the upset of the year!

Either way, it’s going to be a great race and may just become an iconic event on the Australian motorcycle racing calendar as The 6 Hour once was many moons ago.

I’ve spoken to a few people in the industry this week and they seem happy enough with the decision, so lets hope it provides a building platform for a strong future.

We’ll be providing expanded coverage of the AORC in 2011 with more interviews, event coverage and multimedia than ever before, so make sure you spread the word that we’ll have it all here on MotoOnline.

That’s all for this week, thank you once again for stopping by to check